Short Take: Turkish film director, from Istanbul, who shot an extensive series of panoramic photographs all over Turkey during the past four or five years, mostly while scouting locations for his latest film. The dramatic, beautiful photographs have been exhibited in important venues and have earned extensive and intense praise from both critics and the viewing public. He calls the series "Turkey Cinemascope."

A Taste: "Old City of Ankara, 2004" (below) (and the other two pictures in this post) (click on the pictures to see them bigger).

Critical Voice: "From the first photograph of Nuri Bilge Ceylan that I encountered I thought of Pieter Bruegel. With rising excitement I looked at the next and the next till the spark of recognition became a certainty. I was either faced with a contemporary renaissance master, or Pieter Bruegel was the first traveling photographer of the Northern Renaissance. The eerie landscapes where different scenes are played out simultaneously, forcing the eye to travel ceaselessly around the canvas, the clarity of image and attention to detail, the heart-rending, dramatic skies, the epic scale, the heaving elements of nature. The feverish activity of the people of the earth, the weather-beaten, unshaven figures, muffled in their shapeless, timeless clothes, the ever-present animal kingdom accompanying and complementing man. The biblical spectral cities on the rocks, the snow, the cold, the vast unknown continent suspended in time. The classical ruins overtaken by vegetation and man in a strangely symbiotic (co)existence. The futile and unique position of man in the Universe. 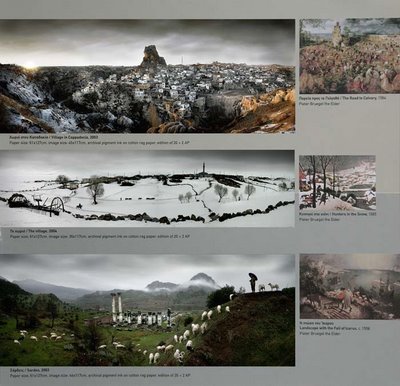 "One of the most outstanding characteristics in both Bruegel's and Ceylan's landscapes is the viewer's perspective. The painter and the photographer choose to describe the scene from above, from the top of a mountain, from a bird's eye view, or the eye of God observing the earth." (Marion Inglessi, Greece, November 2006)

What about his films? We haven't seen one, but his latest—the one he was shooting when he took these pictures—is called Iklimler (in English, Climates) (2006). Also Distant

Where to see the pictures: A current major showing of the Turkey Cinemascope work, at the National Theatre of London in the South Bank, is about to close, on March 3rd.

Book: Not yet, but one hopes.

Website. Includes 70 pictures from the series. Highly recommended for a visit.

The Village, 2004
Posted by: MIKE JOHNSTON