I don't want to make too big a deal of this, but I thought I'd point out just how closely two of my recent posts are related. First there's Sunday's post about IS/VR/AS/SR—let's call it "anti-shake" for simplicity's sake—and then there was the print offer on Monday. 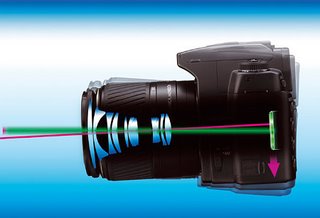 In the comments to the former, several people who shoot with cameras that have anti-shake commented that they'd never again buy a camera without it. I'm firmly of the same feeling. And as it happens, a perfect example of the reason why is the print offer I just posted, the streetlight after the snowfall. As I've mentioned, I took it standing on my front porch in a robe and slippers in 15-degree weather, wide open at 1/8th of a second, handheld. The print holds up nicely at 10x15" and the chances I would have gotten out the tripod to take that shot were, shall we say, "below zero." I would say it's as sharp as I can normally hold a camera at 1/30th. Anti-shake bought me those two extra stops.

My experience is just that again and again and again, I run into situations similar to this, where anti-shake makes success more possible than it would have been without it. I've said it before and I'll say it again: this is gee-whiz technology at its practical best.