Many people regard a "Grip" on a DSLR camera less as an accessory than as a permanent modification, if not something that just should have been included in the first place.

I don't feel that way about it. I recall, back in the dark ages, when my primary working cameras for commercial assignments were Nikon F2's, I thought that the camera with grip/motor module, without the additional bulk of the separate battery pack, would be a much nicer package, if only it would work that way. I never equipped my Olympus E-1 camera with a grip, even though it could certainly have used the increased battery capacity. I preferred to carry two or three spare batteries in my pockets or a camera bag to get through a day of shooting in cold weather, rather than increase the size and weight of the camera itself.

So I didn't expect to like the grip that the elves at Pentax sent me to check out. But expectations are meant to become surprises. The K10D grip, once it's on the camera, doesn't feel like an add-on at all. You simply have a different and equally well-balanced camera in your hand. This reminds me of the Nikon F3, which was completely at home in its own skin either with or without the MD4 accessory motor drive. In a clever move, the Pentax grip has slots to store an extra memory card and a remote cordless release in the slide-out tray that holds the second battery.

Some DSLR grips use a different, larger, battery than the camera's normal one, while others hold two of the regulars. But all, as far as I know, put those batteries in the grip. To install the grip, you first have to remove the camera's battery, remove the battery compartment cover and stow it somewhere on the grip, and then marry the grip and camera. Pentax has chosen to do it very differently. You leave the camera's battery (and compartment cover) in place. You just uncover a set of electrical contacts, stow the cover on the grip, and screw the thing onto the bottom of the camera. Attaching or removing the grip takes five or ten seconds—about as long as changing a lens.

Anyone who thinks of the grip as a permanent item will immediately see a problem here. Every time you need to charge the battery in the camera, you're going to have to remove the grip to get at it. What the hell kind of idea is that?

Well, a pretty clever one, at least if you are in the camp that regards the grip as an accessory, not a permanent installation.

I'm playing with a 12–24mm DA zoom that the elves sent me. It is a monster. After a few weeks shooting with the compact prime lenses, this thing, especially with it's properly engineered (read big) lens shade, seems to be about the size of my new car. But my early results show it to be optically excellent, and while I was sure I would hate it the minute I laid eyes on it, when I pick up the camera with the grip and the lens mounted, it's all ergonomically perfect. This is no rig for inconspicuous shooting, but it is perfectly balanced in my hands. The combination of a zoom that covers the focal lengths I use for almost all my pictures with enormous battery capacity and a storage slot for more memory becomes a pretty universal axe. Just the thing to go out and spend a day with hunting for pictures.

But what if I need to spend the morning doing errands, taking packages to FedEx, and so on, and just want to have a camera along? Look at this: 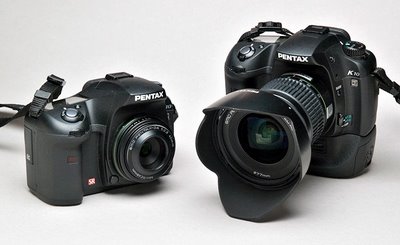 The camera on the right is not something to grab and sling over my shoulder when I'm not entirely centered on making pictures. The camera on the left is. The transformation takes less than half a minute. Good idea.

Posted by: CARL WEESE
6:14 AM
Unknown