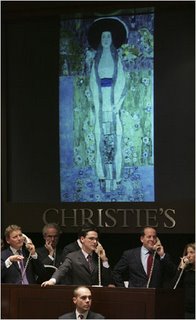 In a landmark sale, the biggest in auction history, nearly half a billion dollars' worth of art changed hands last night at Christie’s sale of Impressionist and modern art. Soaring prices for blockbuster paintings by Klimt and Gauguin left thousands of spectators, who came to watch and to buy, gasping.

Left: The telephone bank at Christie’s during bidding for Klimt's "Portrait of Adele Bloch-Bauer II" (1912). The portrait sold for $87.9 million. Photo by Hiroko Masuike for The New York Times

"It was certainly the most amazing sale I've ever taken," said a dazed Christopher Burge, honorary chairman of Christie’s and the evening's auctioneer, after the two-and-a-half hour sale.

The sale included an estimated $125 million worth of artworks that had recently been returned to the heirs of owners from whom they were looted by the Nazis during World War II. Before restitution, five had been hanging in museums....

Posted by: MIKE JOHNSTON
6:07 AM
Unknown