Sometimes in the digital photography discussion forums around the internet you could get the idea that "high ISO noise" is the most important issue in digital capture, even more important than megapixels. I don't normally assign this issue such high priority, but there are times when it really does matter. I accidentally tripped over a way to reduce noise in certain circumstances so I thought I'd pass it along.

It was a dark rainy day, weather that I really enjoy. I have an aging Olympus E-1 (it works just fine; what's aging is its megapixel count) and it's a nearly perfect rain camera because it's designed to be water-resistant. What makes it less than perfect is that there are no short, fast, lenses available for it and it has quite a lot of disagreeable noisiness beginning at ISO 400. If you want to run around and make handheld pictures with an ƒ/2.8-3.5 lens, ISO 400 is mandatory, maybe minimal.

However, rainy days are dark, but the light is also very flat; low in contrast. Later in the day, back at the Mac, I looked at the pictures in the Adobe Camera Raw module of Photoshop CS2. Here's what the default settings showed for one shot:
  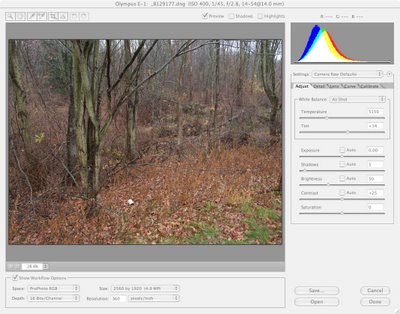 I had let the small areas of sky burn out just a little; easy to rescue in ACR. The dark areas are fully exposed, even the wet black tree bark which is one of the deepest subject values you're likely to encounter and describe in a print. But these low values can be made even softer. I dropped the contrast from the default 25 to 0. Then I pulled the exposure slider to the left, holding down the option key so highlight clipping would be highlighted, moving it just enough to eliminate the clipping. Then I moved the shadow slider to the right to give the dark tones some substance and increase the separation in the low values. This put some snap back into the image, but left it too dark, so I moved the brightness slider to bring up the middle values:
  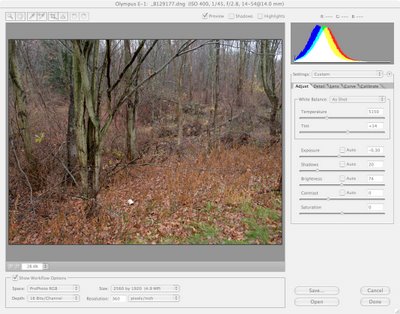 Notice that the overall effect hasn't changed much, even the histogram shows little difference. But the way the RAW data has been rearranged is going to result in a much richer print. Plus, all the detail I wanted has been retained but the deepest captured data—which is noisy with this camera at ISO 400—has been clipped away by the shadow setting of 20. So I get a rich, noiseless print at a speed the camera isn't supposed to be able to do well. Bear in mind, many of the situations where you want high ISO have high contrast lighting and this approach won't work. You'd just lose all the subject's lower values. But in the many situations where the lighting is dim but soft, this little trick may come in handy. I don't know how other RAW processors work, but any good one should let you do analogous maneuvers to achieve a similar result.
  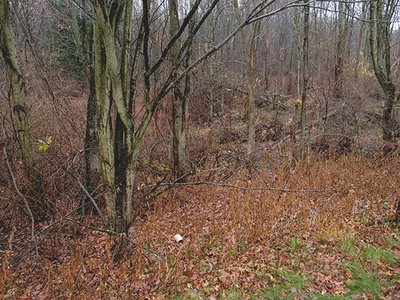 Posted by CARL WEESE
4:43 AM
Unknown