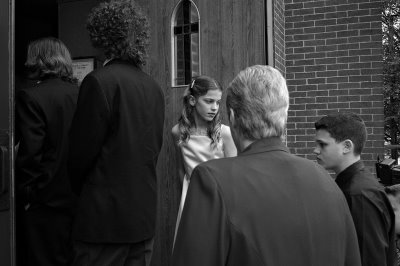 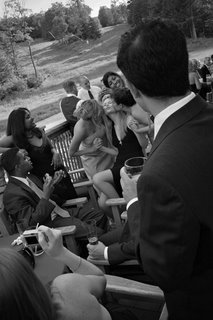 And speaking of Sean and Melissa Reid (Sean writes the pay camera-review site Reid Reviews, if you're coming late to the conversation), if I ever get married, that's who I'd hire. I like the "wedding photojournalism" style.

Wedding photographers in general are the Rodney Dangerfields of photography (the late R.D. was a comedian whose tagline was "I don't get no respect," if you're coming late to that conversation). Wedding photography is actually quite difficult, presenting the photographer with a wide variety of challenges and only one chance to get it right.

One of the side effects of a career spent dispensing advice is that people often come to me for advice. (Oh well.) So every now and then someone says, can you recommend a good wedding photographer? There have been a few I've recommended over the years, including the late Susan Kennedy, in the Washington, D.C. area, who had a knack for putting brides at ease and adding a nice presence to the ceremony. But most of the time, regardless of who I recommend, and regardless of price they charge, the follow-up is the same: can't you recommend somebody cheaper?

Well, heck. And then a third of the couples in America complain about their wedding photography. (One day I'm going to write a book called "Two Plus Two," about the many ways in which people overlook obvious explanations for things that are right in front of their noses—for instance, in the 1980s there were thousands of spooky, unexplained Elvis sightings. There were also 200 full- or part-time Elvis impersonators in America! Put two and two together, people....) So do you want cheap or do you want good? The two can be different things.

My advice if you want to hire a wedding photographer? Find one you really like and buy 'em a plane ticket. What's the added expense in the overall scheme of paying for a wedding? You don't get married every day.

Here's a link to Sean and Melissa's wedding photography site. (I note in passing that most of their pictures look too dark on my monitor, which probably indicates a monitor calibration mismatch between their site and my monitor. Your mileage will probably vary.)

Posted by: MIKE JOHNSTON
4:53 AM
Unknown