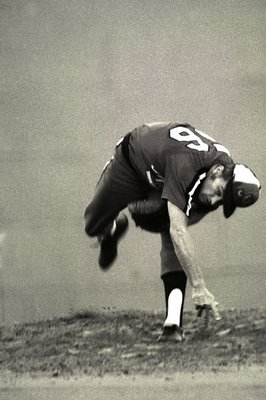 Ever seen a better picture of a pitcher? Jim Bouton by Ancil Nance.
I asked Mike if he'd ever talked to Johnny Sain about contracts and he said he hadn't. Sain gives you good advice about how to get money out of a ballclub. John's a quiet guy and follows most of the baseball rules about keeping your mouth shut, but he's not afraid to ask for money if he thinks he deserves it. He was with the Boston Braves in 1948, the year they won the pennant. It was Spahn and Sain and then, dear Lord, two days of rain. Warren Spahn and Sain were the staff and Sain really put it to John Quinn, who was the general manager. Sain had had a big argument in the Spring about his contract and signed for less than he wanted. Now they were just home from a western trip and fighting for the pennant and Sain went to Quinn and said, "I'd like to talk about my contract."

"We'll talk about your contract next winter, when it comes up," Quinn said.

"What the hell," Quinn said. "You signed a contract and we're going to stick by it. We can't renegotiate a contract during the season."

"Well, we're going to renegotiate this one," John said.

"What the hell do you mean by that?" Quinn said.

"I'm supposed to pitch Thursday," Sain said. "But unless you pay me what I wanted in the beginning I'm not pitching."

That meant it would be Spahn and rain and pray for a hurricane, and then maybe a flood. So Quinn tore up his contract and gave him a new one, and John won 24 games. He used to say to me, "Now, don't be afraid to climb those golden stairs. Go in there and get what you're worth."