"If you stuck a piece of shit on the wall, it would be all the same to them as long as someone told them the shit was worth money. That's the nouveau-riche approach."

—Andrea Fraser, performance script for May I Help You? (1991)
Fraser's statement issues from the mouth of a supposed patrician, a woman who might serve on a museum's board of directors. Hers is a provocation meant to distinguish between old money and new, between those with a vast store of cultural capital and those in the business of acquiring as much as they can in the shortest time possible. For the patrician, the acquisitive efficiency of the nouveau riche is odious because the very prospect of ready exchangeability jeopardises long-standing traditions of cultural inheritance. This efficiency, as such, produces a relative indifference to deeply ingrained aesthetic experience. Curiously, her rhetorical substitution of shit for art recapitulates the logic of Piero Manzoni's legendary work Merda d'artista (1961), a provocation of an entirely different order. 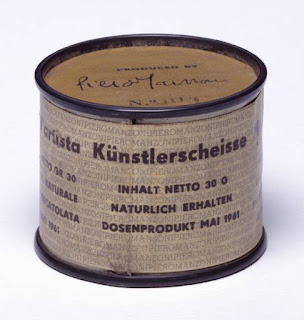 Piero Manzoni, Italian, 1933–1963: Merda d'artista (Artist's Shit), 1961
Merda d'artista is an edition of 90 signed and numbered works that Manzoni said he made from his own excrement. Each is a 30-gram can of shit, measuring 4.8x6.5cm, "freshly preserved, produced and tinned," as stated on the label. This information appears in Italian, French, German and English, against a background pattern produced by repeating the artist's name in block letters. Because Manzoni sold each can by weight at gold's daily market price, the shit literally became worth its weight in gold. In retrospect, this has proved to be a bargain. At $35.20 (£18.07) per ounce—the price at which the London Gold Pool (an international consortium of central banks) wanted to fix the precious metal—a tin originally would have cost about $37. That was 1961. Thirty years later, Sotheby's auctioned one for $67,000. Then, the price of gold had climbed to $374 per ounce. If Manzoni's initial pricing scheme still held, it should have cost only $395.77. In other words, in 1991 Merda d'artista had outperformed gold in price by more than 70 times....

Posted by: DAVID EMERICK
Featured Comment by David Bennett: Wonderful—that's the kind of thing that makes this site worth coming back to—this educational shit is great.
6:19 AM
Unknown