Last Wednesday, photographer Jim Cole, 57, of Bozeman, Montana, suffered an attack by a grizzly bear while trying out a new digital SLR in the Hayden Valley area of Yellowstone National Park. Jim was swiped twice across the head and face. Jim then had to hike two to three miles back to the road to find rescue. After being flown to a hospital in Idaho Falls, he underwent seven hours of emergency reconstructive surgery, and is now on a ventilator and being fed through a tube, unable to speak. As of Sunday he was listed in fair condition. 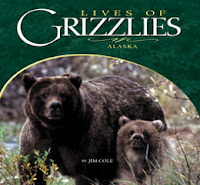 and Lives of Grizzlies: Alaska

, are the result of a lifetime observing and photographing the animals. (The links are to the Amazon.com pages.) Jim is an outspoken advocate for the protection of bears and their habitat.

"Grizzly" is not a separate species of bear as was once believed. It's a name given to large individuals of the species Ursus arctos, or brown bear, in the northern reaches of its range. The fur of mature brown bears can turn silvery at the tips, giving the animal a shimmering or "grizzled" appearance. The biggest grizzlies are, along with big polar bears, the largest land predators on Earth. They can grow to 1,500 pounds and are phenomenally strong. Their "cuddly," roly-poly appearance is an illusion, created by thick fur and a layer of fat; skinned, their musculature resembles that of supersized, superhuman weighlifters. There are some wonderfully vivid grizzly bear stories in John McPhee's superb book on Alaska, Coming into the Country 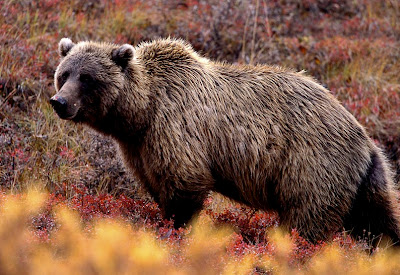 A grizzly, showing the gray or grizzled tips of its fur.
(Photo: John Eastcott and Yva Momatiuk, National Geographic)
Bears involved in attacks on people are sometimes destroyed, but Yellowstone Park Rangers do not plan to take any action against the bear. Last Wednesday's attack is believed not to have been predatory, since there were no bite marks on Cole's head or chest. Apparently Cole himself told the Rangers who found him that he believed it was a defensive action by a sow with a cub.

It was the second bear attack on Cole. The first, not as serious, occurred in 1993. In 2004, Cole was ticketed for willfully approaching within 100 yards of bears, but was acquitted of that charge by a judge in 2005. Until Wednesday there had been only eight minor incidents with bears in Yellowstone since 2000, and the last time a person was killed by a bear there was in 1986. Cole's friend Rich Berman told reporter Scott McMillion of the Bozeman Daily Chronicle that Jim Cole would not want the bear to be hurt as a result of the incident. "If anything good comes from this, it would be that people learn from his mistake," Berman said. "Jim would want people to still go to the park, enjoy the park, respect the wildlife and be careful.

"And please don’t try to get too close to get the perfect picture."

Our best wishes to Jim for a speedy recovery.