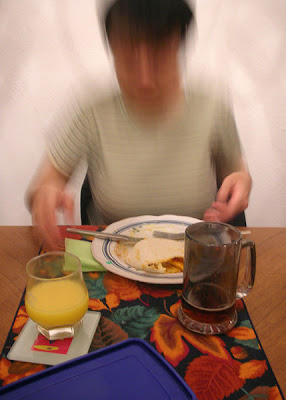 A digital point-and-shoot picture by David A. Goldfarb
In response to the previous post, "Lazy Aussie" wrote:

"You are right—mostly, the only people able to get good photos out of [point-and-shoots] are the people least likely to want one. Yes, there are superb images out of pinholes, Holgas, point-and-shoots, etc., but these are usually from those who learnt their skills from other cameras. But maybe your complaint is that more people don't care that their images could be better?"

My complaint is that more people don't care that their cameras could be better.

I'm perfectly sympathetic to people who use digital point-and-shoots. I know nice work can be done with them. They do have advantages, of course (low cost, handy size), and there's nothing wrong with striving to work within the limitations of the breed.

Overall I'm increasingly disappointed about the direction that digital camera design appears to be taking. Paul Leidl mentioned something that's been a sore point with me for the last half year or so (actually I don't remember when I started getting cranky about this, but it's been a while now): has anybody noticed the demise of the entire "prosumer" or "bridge" class of cameras? As long as the cheapest DSLR was $3,000 and up, there was plenty of room between lowest-common-denominator point-and-shoots and DSLRs, and the manufacturers for a while had some very creative offerings in the middle there. For a while it looked like there was a sort of renaissance in camera design occurring. There was some real creativity going on. Not all the attempts were equally successful, but companies were "thinking differently" and taking fresh approaches and trying new things. I was very encouraged by it.

I also assumed it was going to continue. But the most creative, fresh-thinking company—Olympus—has gotten spanked time and time again for daring to be different. And of course as soon as the APS-C-sensor DSLRs fell to $2,000 and then to $1,500 and then to $1,000 and now to $500 or even less, the intense price pressure simply vaporized whole classes of cameras. Oh, I know there are still quite a few interesting and different cameras out there. And the consumer mania for those absurd 12X zoom lenses is keeping one class of "different" cameras from dying, at least so far. But what it's looking like more and more, to me at least, is that the market is heading straight toward exactly where it was just before digital came along: namely, divided between black-blob Wunderplastik SLRs on the one hand and crappy little cookie-cutter point-and-shoots on the other. (And the BBWP category is divided strictly in terms of better = bigger and smaller = cheaper, just like film BBWP used to be. Arrrgh.) Nothing but a straight copy of where film cameras were in, say, 1995. Digital's not there yet, but it's sure heading there fast.

Even Leica, which is in the near-unique position of being able to charge luxury prices for its products, just copied its own most popular film camera. No newthink at all.

Hell in a handbasket. It would be a real shame if, after just a ten- or twelve-year renaissance of creativity, variety, and fresh thinking, we were to be consigned once again to a dull wasteland of sameness, conservatism, and unoriginality.

People react with great umbrage when I decry excessive choice, because in their view choice = freedom, but the truth is that, at the low end of the market, product proliferation isn't motivated primarily by the desire to give consumers more choices. It's done for that reason, yes, but also for other reasons, which I won't go into here. And the truth is, product proliferation amongst digital point-and-shoots is largely false choice. There may be 150 digital point-and-shoots on the market—I don't know what the real number is—but from the consumer's perspective you could probably boil that down to eight or ten cameras without effectively compromising consumer choice.

And yet look at all the choices we don't have. The Nikon 950-style bodies, largely gone (partially resurrected recently in the S10, I admit). The Sony F-7XX line made it all the way to the large-sensor R-1, but is now gone. The Olympus c-XXXX series, long-running, but basically gone. The Olympus E-10/E-20 series hangs on in the form of the inexplicably orphaned E-1, one of the most successful overall camera designs I know of, film or digital—but it's not going anywhere from here. There won't be an Epson R-D2. The Canon G7 is a definite step down from the more capable G6. (Why? Because you're supposed to buy a Digital Rebel if you want the features the G6 had that the G7 doesn't.) Articulated LCDs are getting scarcer. Of the brands tracked by dpreview, Agfa, Contax, HP, JVC, Konica-Minolta, Kyocera, Sanyo and Toshiba have entirely or effectively fled the field, and Ricoh doesn't sell its cameras, including the well-regarded GR Digital, in North America. It's been sixteen months since I published "'DMD': The Digital Camera I'd Like to Own" on The Luminous Landscape, and the first reasonable approximation of a camera like the one I described, the Sigma DP-1, is slowly making its way to release only now.

We'll see how that does. Frankly, I think the "window of opportunity" for a DMD has come and gone. There's probably no longer a place for a fast, responsive, large-sensor miniature camera in the price hierarchy. (There was probably never a place for a fixed-prime-lens camera, but let's leave that topic alone for now.)

The cameras today are better now in some ways, naturally, because of engineering progress that's been made in the meantime, and the DSLRs are certainly cheaper, but in terms of inventive designs we have less choice now than we had four years ago. Moreover, the welcome spectacle of camera designers rethinking whole categories and types of cameras and styles of shooting, and the great promise it held for the future, seems to be withering fast. I hate to say it. I hate to see it.

I don't deny that there's a place for a digital point-and-shoot even in a seasoned photographer's bag of tricks. They're useful little buggers. (I've got a Fuji F30, although I can't seem to remember how to use it in between the times I try.) But they're not the only kind of non-DSLR that's useful. What I'm afraid of is that point-and-shoots are soon going to be the sole option south of entry-level DSLRs, because Joe Sixpack and Jill Boxed White Wine won't want, need, or care about anything else.

Featured Comment by Ken Cobb: "I think the innovation is now coming from the smaller DSLR models, like the D40 and the E-400, where they're trying to pack DSLR features in ever smaller bodies. Which is fine by me, since while I loved my C7070 and made many very nice photos with it, it was frankly very sluggish (RAW mode was unusably slow), hard to use, and noisy above ISO 200.

"Where I would like to see more innovation is in smaller lenses for these smaller DSLRs. In other words, get back to the bridge camera size, but come at it from the DSLR end rather than the P&S end."
6:02 PM
Unknown