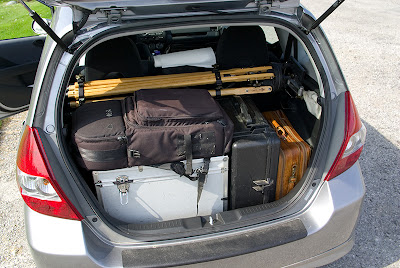 Lest anyone think the most important equipment debate is between a shirt-pocket compact cam and a sling-over-the-shoulder entry level DSLR, here's Carl Weese's new Honda Fit packed up for a two-day photography jaunt through Massachusetts and New York State. Carl tells me that the small brown bag on the far right, besides a laptop and two hard drives, contained a change of clothes and some toiletries. All the rest is photo equipment. Also, there's another case under the tripod that you can't see; it held extra 8x10 film holders and two big lenses for the 7x17" view camera.

Incidentally, Carl noted with some amazement that over the course of one 366-mile leg of the 874-mile trip, the Fit's mileage was 10% better than the EPA Highway MPG estimate, even though he ran the A/C part of the way! It outperformed its EPA estimate for the trip as a whole, too. Not too shabby for hauling all this gear.

It has to hold Carl, too. Although he's not wide, lucky sod, he's quite a bit taller than the average Joe.

Carl Weese, Ballfield, Keeseville, New York
And here's an example, if you can call it that, of why Carl goes out. The web image was scanned from a 7x17" contact platinum/palladium print made on Masa paper, a Japanese tissue with a rough surface that Carl says works surprisingly well for contact prints. The original is of course exquisitely detailed, and vivid and luminous despite its gentle contrast. The web image is only the merest approximation of the print. 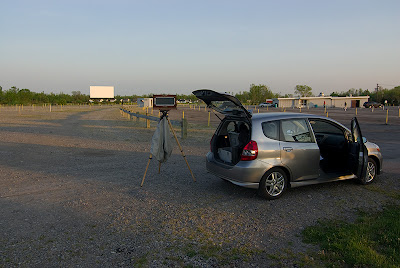 Posted by: MIKE JOHNSTON
10:07 AM
Unknown