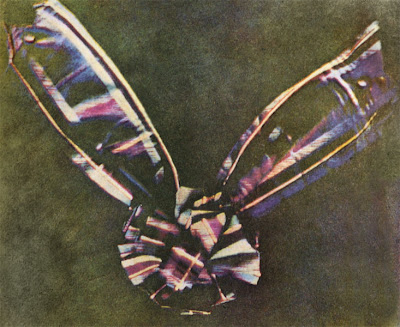 Contrary to popular opinion, this was not the first true color photograph
ever made. It was experimental error.
There's a certain type of error in judgment that we humans are all subject to. When presented with information that contradicts our beliefs, we tend to be nitpicky and skeptical and aggressively compulsive about every detail. When handed information that confirms our beliefs, we're inclined to accept it without critical evaluation.

What does this have to do with photography? Well, James Clerk Maxwell is credited with having made the first true color photograph back in 1861. Most of us accept his results at face value, because they agree with how we now do color photography. There's one small problem with this. Maxwell's experiment was a failure; it had a major methodological blunder that rendered it meaningless. It didn't prove anything. Few of us caught that, and certainly Maxwell did not.

Here's the key problem, which should have bothered all of us the first time we read about this great experiment. In 1861, there were no panchromatic emulsions. The type of emulsion Maxwell used was sensitive only to blue light, with just the faintest hints of blue-green sensitivity. Nothing beyond that. No yellow, no red. While it's possible the Maxwell used some experimental emulsion that had red sensitivity, there's nothing about this in the detailed account of the experiments written by his assistant, Sutton (who did the actual labor). So, how in the world could they have successfully photographed a scene through red, yellow, green, and blue filters?

(And why yellow? Well, I think the likely answer to that is that Maxwell was also testing out the three-color versus four-color theories of human vision. Newton had proposed that there were four visual primaries: red, yellow, green, and blue. Later, others argued that there were three primaries: red, green, and blue. This was not a settled matter, so it is very probable that Maxwell saw this as an opportunity to test both hypotheses.*)

The unfortunate answer is that he didn't. The blue exposure was just fine—a matter of seconds. In order to make the green exposure, Sutton had to substantially dilute the copper chloride solution they used as a filter. Even then, the exposure ran to 12 minutes. A strong, deep-red filter of ferric thiocyanate resulted in an exposure of only eight minutes, though.

So, why did the experiment work at all? Because ferric thiocyanate passes a considerable amount of ultraviolet light, and many red fabric dyes reflect in the near ultraviolet as well as in the red. By pure accident, they got a plausible-looking photograph. It was the right answer, but for the wrong reason; had they a chosen a different subject (say, a flower garden or a rainbow) it would have come out all wrong.

The greatest expert on light and electromagnetic radiation the world has ever known got tripped up by a simple experimental error because the results confirmed his expectations. Imagine how easy it is for us mere mortals to be caught in the same intellectual trap.

Posted by: CTEIN
*The answer, not established until the 1970s, is that both are correct! The human eye has three kinds of cells that respond to frequency bands primarily in the red, green, and blue. But the brain interprets the information from those cells as four distinct primary colors.
10:54 AM
Unknown