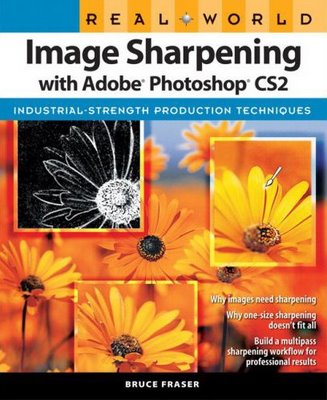 The last published book by the late Bruce Fraser, first recipient of the Lifetime Achievement Award from the National Association of Photoshop Professionals (NAPP). Although arguably not as important a book as his pivotal Real World Camera Raw With Adobe Photoshop CS2

I knew this title should win T.O.P.'s Tech Book award when I read a dismissive online review pointing out that you can just go get PhotoKit Sharpener and be done with it, that nobody needs to know this much about sharpening. Well, maybe not—but y'know, enthusiasts are people who want to know a subject from the ground up and from the inside out, and to whom the nuts and bolts of good technique are not necessarily a burden but a challenge, even a pleasure. They want to understand a technique well enough to apply it with freedom and subtlety. (Even if, afterwards, they go get PhotoKit Sharpener.) Our kind of folk—making Image Sharpening our kind of technical book.

Featured Comment by John Lehet: I've considered myself to be well above average in understanding USM since version 2 of Photoshop, but this book blew my mind. I wish it had been available 10 years ago, or that I read it a year ago.

[Note: John Lehet is a skilled photographer and master edition printer whose work has been featured several times on this blog and whose website can be seen here. —Ed.]

Featured Comment by David Mantripp: I think that on balance this is the most illuminating technical book on a digital topic that I have ever read. Bruce Fraser accomplished a level of readability and clarity of prose here which I don't think he reached before—Real Worl Color Management is a little heavy handed, and the ACR book doesn't really add up to the sum of its parts. Technical books probably do not need, in the absolute, to have a sense of narrative or other literary qualities, but Real World Sharpening has these and they really, really help.

Just for the record, this isn't just an emotional response to Bruce Fraser's sad passing—I first wrote about this book on 30th August 2006, before I had any idea that he was unwell.
2:53 PM
Unknown