Home » »Unlabelled » On Buying a Camera

On Buying a Camera

It's been over two and a half years since I've bought a camera. I don't buy them any more often than I need to. I've also never bounced around from brand to brand looking for greener grass, while at the same time I've never felt so tied to one brand that I wouldn't buy from another maker if they had the exact thing I needed. Back in early 2004 I had to buy a digital camera in order to accept a large assignment that needed to be done in digital capture. Despite a closet full of Nikon gear from F2 to F4 and several generations of glass, I decided that for my needs the whole "legacy" equipment issue was pretty irrelevant. I found that I really liked the Olympus E-1 camera and its digital Zuiko lenses.

But there was also a special factor—the Olympus "dust buster" designed to prevent particles from accumulating on the sensor. Am I some technophobe afraid to deal with an occasional need to roll up my sleeves and go inside the camera? Hardly. The thing was, that assignment was to shoot an entire book of bathroom remodeling projects. Hundreds of step-by-step illustrations in cramped surroundings immersed in sawdust, gyp-board dust, wallboard mud dust, tile groat dust: every kind of dust in the known universe! If the widget just cut back on the number of cleanings I'd have to do, and cut down on the amount of retouching between cleanings, it would be worth its weight in gold. Because of the cramped shooting conditions, short lenses would be vital and the 4/3rds designed-for-digital system excels at short lens performance.

I lucked out. Thirty months and more than 40,000 exposures later, I've never found a speck of sensor dust.

Now however, for reasons anyone can imagine, I really need to have access to at least twice as many pixels as the E-1's five million. There have been delays in the release of the E-1 replacement, and Pentax came out with the K10D, a 10-MP camera with overall specs that are quite amazing in view of its price point.

But the kicker is that Pentax also has a trio of compact prime lenses. The Olympus road map shows no plans for this (neither do the Canon/Nikon big boys). To someone who has worked with M Leicas since 1967, that's a problem. While the image quality of the digital Zuiko zooms is excellent, I constantly find myself wishing for far less bulky lenses. So the die was cast, the "notify when in stock" order went out to B&H, and a week ago the camera arrived with 21 and 40mm lenses.

Will I be as happy with this decision as I have been with the Olympus purchase? Only time will tell. If Oly introduces a totally killer E-1 replacement in the next year and I decide that I want it to use with those zooms, I figure I won't regret the Pentax purchase because I'll still want the smaller camera and compact lenses for much of my work.

So what's my out-of-the-box reaction? The camera is small, but not delicate or dainty. Build quality is a tiny notch below the E-1, but that's a very high place to be, especially considering the remarkable price. The two DA lenses are metal and glass jewels, as solid and smooth as the finest lenses I've ever had from Leitz, Zeiss, or Nikon. They also have these quirky custom metal lens shades that are just, oh well: cute. Here's the camera with the 40mm (that's equivalent to 60 on a 35mm film camera): 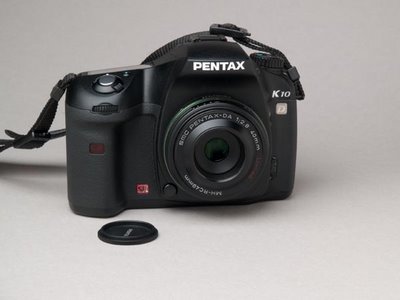 That little lens cap screws into the round opening in the lens shade, so the shade really never needs to be removed except to use filters.

Here it is with the 21 (equivalent to 31.5mm) and—I couldn't help myself—for comparison, the Uber-example of high-end compact cameras, a Leica M6 with 35mm Summicron:
 

Sure, the rangefinder camera is smaller, and that lens is 1.3 stops faster than the Pentax 21mm. But really, it isn't all that much smaller! I was quite surprised when I set them down next to each other.

So you're saying "enough already with pictures of the camera; show me what kind of pictures the camera can make!"

Next time. When I've had more experience with it. If you want a sneak peek, though, hop over to my web log
Posted by: CARL WEESE
11:50 AM
Unknown