Strange to say it, but I've only ever photographed digitally in the four States surrounding Lake Michigan—Wisconsin, Michigan, Illinois, and Indiana. (For those of you international visitors who might not know U.S. geography, Lake Michigan is one of the Great Lakes, in the center of North America. It's the only one of the five that doesn't share a border with Canada.) So I've decided to title some of my prints with the name of the State it was taken in, and a number. 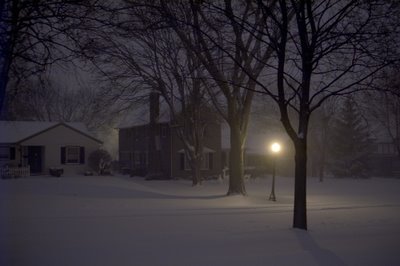 I'm calling this one Wisconsin #7.

It's a relatively casual shot from last week's post New Fallen Snows, and a picture that leans pretty heavily to what one of my friends calls my "closet pictorialist" side, but the print turned out to be quite a stunner. (Everybody goes "oooh" when they see it.) It's fairly dark, and even though it's printed in color it's almost a black-and-white image. I opted for very little sharpening, in order to preserve the mood of murky near-darkness. In pigment it looks very painterly, almost non-photographic (at least in the art-paper "Gallery" version), and emotionally it sort of resembles a Chris van Allsburg painting from one of his children's books.

The Standard print is made on HP Advanced Glossy 8.5x11" paper, and looks a little brighter than the monitor image. It looks good but doesn't have a whole lot of, whaddayacall, "presence." The image is 10" wide, and unsigned.

The Gallery print is made on a full sheet of 13x19" Hahnemühle Photo Rag (HP Vivera pigment inks in both cases). The image area is large enough but not too large at 15" wide. I suspect this one may be popular (at least, I think it ought to be, although that might be vanity speaking), so I'm going to take a chance and make 8 copies of this one instead of 5*. (Hey, if they don't sell I can always give them away as Christmas presents.) The Gallery prints are numbered and signed.

*The Gallery print ended up being more popular than I thought, so I decided to accept all the orders received within the first 24 hours before. This was posted during the sale. Please see below for current Updates. 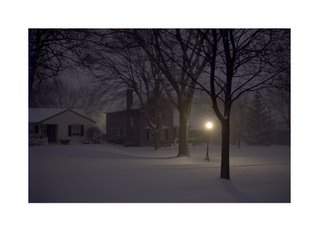 UPDATE Thurs. 12/28: The new paper finally got here today, finally, so the last of the prints should be shipped tomorrow.


Print offers are posted at 6:30 a.m. Central U.S. time most Mondays and Fridays.