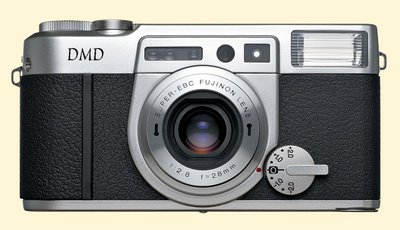 I have good news and bad news.

The good news is that the brand-new Fuji Klasse Digital is a high-quality, well-made compact point-and-shoot available in black or chrome. It has a 28mm ƒ/2.8 Fujinon lens like the film version, but it's a full-featured digital camera with a DSLR-sized (23 x 15.5mm) 10-MP Fuji SuperCCD sensor. It has a 2.5" live viewing sceen that tilts upwards, and back controls similar to those on any entry-level digital SLR. The camera is silent, has an almost non-existant shutter lag, takes standard SD cards, and features built-in shake reduction. Unlike the film version it is not a limited edition. Retail price is said to be in the area of $500.

The bad news, unfortunately, is very bad. It's that after pining long and hard for just such a camera, I...made this up. The "Klasse Digital" doesn't exist—at least, not that I or anyone else outside of Fuji know about.

And not only that, but nobody else will build a camera like this, either.

And about that, I have several questions, to wit: why? And, why? Why, why, why? Finally, how hard can it be?

* Satire alert
Featured Comment by Eamon Hickey: We may have covered this ground before on one web forum or another, Mike, but I'll echo your frustration one more time. I had hoped that maybe—just maybe by now for god's sake—some camera company somewhere would get a clue and do it.

But that's the photographer/camera lover in me talking. The former Nikon sales rep in me (a shrivelled creature who I'm trying hard to finally kill forever) wonders whether the economics really work for this idea. There are definitely some few thousands of photographers who get the appeal of a very compact, serious camera, but how many are there really? One thing I'm certain of is that the desire for such a camera is over-represented on photo-enthusiast web forums.

I can't speak with authority on issues of digital camera cost accounting, but I suspect the effects of unit volume on price are a bigger barrier here than most of us realize. How much would Canon have to charge for a 400D/Rebel XTi if they could only sell 10,000 units a year instead of 1 million or more. A whole lot more than $800 or so, I'm guessing, and my enthusiasm for an imaginary compact, serious, fixed-lens digicam plunges quickly as the imaginary price climbs above $1,000. At $2,500, that's me in the corner hitting my head against the wall.

But I agree with Eolake that, with the digital camera market exiting its adolescence, we should see some more interesting and varied niches filled (e.g. the Sigma DP-1). Can't happen soon enough for me. The variety of digital camera designs is tragically impoverished compared to all the weird and wonderful film cameras we used to have.

Sorry for the ramble; this is a subject dear to my heart.
4:50 AM
Unknown