Most references to anti-shake technology talk about using long lenses at shutter speeds normally useful only with normal lenses, or about working in very low light conditions for reportorial-style shooting with short or normal lenses wide open at shutter speeds that were not possible to hand-hold in the past. The rule of thumb with 35mm cameras is that you can, with practice, expect a good success rate at about the reciprocal of the focal length, i.e., 1/60th second with a normal 50mm lens, 1/30th with a 35mm or a 28mm, 1/250th with a 180mm. For a DSLR with a 1.5 factor relative to 35mm you'd up those rule of thumb speeds by the same 1.5 so a 40mm/60mm-equivalent should need 1/60th sec.

I've been thinking about another potential use. The light in a forest during a soft rain can be magical, though in winter it can be pretty uncomfortable to work with. I've done a lot of large format pictures in this light, but it's arduous work with many traps to ruin pictures, ranging from tripod legs sinking into soft ground to large pieces of film buckling during long exposures because they've absorbed too much humidity. Working in wet conditions with a small camera on a tripod isn't a whole lot more expedient.

When I first got a good DSLR several years ago, which had weather-resistance as a key feature, I went out to shoot rain in the forest, both on tripod and in a freewheeling, walkabout manner. The weatherproofing worked fine, though it was hard to keep water drops off the lens, especially handling the camera on a tripod. With the small sensor and short lenses of digital capture, a few drops that would have no meaningful effect on an 8x10 camera's results show huge soft blobs in the DSLR picture because of the enormous depth of field. But I also found that, despite that relatively deep focus, I didn't like my results with the lenses wide open, which they had to be to work in the dim light handheld. A really shallow plane of focus and wildly out of focus backgrounds—the "selective focus" technique—just isn't what the woods look like to me. Not that I need Group ƒ.64 universal focus, but considerable depth and a fair amount of definition even in the out-of-focus background seems necessary. So when the day after Christmas offered soft and beautiful light with on and off gentle, but chilly, rain, I headed to my favorite nearby forest reservation for an experiment.

First, a digression about hand-holding slow shutter speeds, or speeds that are slow in relation to a long lens. Any marksman knows that no matter how steady and accurate your aim may be, if you flinch the release of an arrow or jerk a firearm's trigger instead of squeezing it skillfully, you simply will not hit what you aimed at. In fact, a steady aim isn't especially important at all. What counts is being able to have the aim perfect at the exact instant of an equally perfect release. Watching photographers over the years, including plenty of pros, I'm convinced that far more hand-held pictures are ruined by lousy shutter release technique than by shaky hands. Any marksman can also tell you how to get better at this. It's the same way musicians get to Carnegie Hall—practice, Dude, practice! End digression.

What I wanted to find out was whether the SR function of the Pentax K10D would let me stop down to apertures that gave the depth of field I wanted and deliver good results at the resulting shutter speeds, which could not reasonably be expected to work without anti-shake technology (I was thinking of, say, 50/50 success instead of one out of ten). This way I could walk around with the camera cradled in my hands, lens pointed down out of the drips and drops, and lift it only to make exposures of interesting subjects. In the woods, I set the K10D to one of its two Aperture Priority functions, set the ISO to Auto with range limited to 100–400, with the aperture for the 21mm/32mm-equivalent lens at ƒ/8, and of course, the Shake Reduction function switched on. The first thing I looked at... 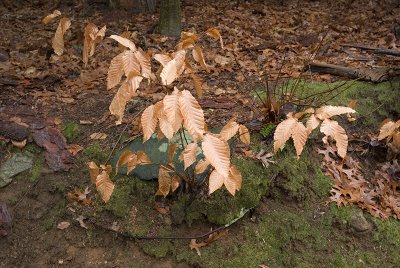 Persistent Leaves, Hidden Valley
...came in at 1/8th sec. exposure, and while the background of this close framing is certainly not in focus, I think it works fine whereas with the lens wide open barely a single leaf would be sharp and the background would have turned to mush instead of reading as forest floor. The texture of the leaves is wonderfully detailed in all five exposures I made (this is simply the prettiest), but that won't be terribly apparent in small web repro. So SR passed its first test as a virtual tripod for this sort of shooting. Here is a shot done from considerably greater distance at 1/6th sec.... 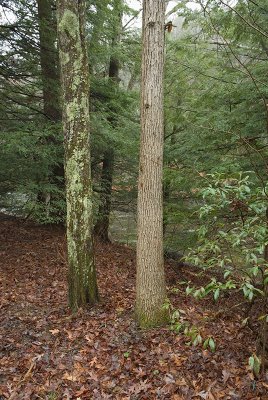 Two Trees and the Shepaug, Hidden Valley
...the bark of the two trees crackles with detail in the original file and the laurel leaves in front are in quite good focus. While the focus is not universal from front to back, I like it much better than I would a sharp zone of a foot or less, which is what it would be with the lens wide open, which is what it would have to be for a rational unassisted shutter speed of 1/30 sec. I did a lot of captures over an hour or so. I shot each idea two or three times. When ƒ/8 pulled the shutter below 1/4 sec. I opened to ƒ/5.6. There are some captures that look soft at 100% view but few that wouldn't look fine (at least for resolution) sized for a small print. The amazing thing is that a large percentage of them look OK even at 100% and so could easily be interpolated up well beyond the native (13-inch wide) resolution of the K10D. If you'd like to see more of these captures, just to think about the sorts of pictures this technique lends itself to—you can't judge resolution from the web-prepared files—pop over to my web log to see a few others in the posting for 12/28/06.