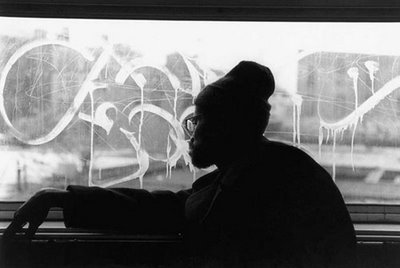 America's unending war on poverty and drugs has been about as successful as its unending war on terror, mainly because its enemies are abstractions. Meanwhile, the real worlds (not the ones you see on MTV) of drug and thug culture have been left to wither, like its victims and champions, beneath a glossy simulacrum.

Few are those souls who seek to document and transmit the routinized pain and addiction of these worlds—worlds filled with everything but Cristal Champagne, Hummers and supermodels. Rather, they are the scenes of unending wars whose only victory is another fix; once each fix is achieved the whole process starts over again like a nightmarish rerun. So it should come as no surprise that those who journey into the hearts of darkness that pump lifeblood into these circular hells might know their way around a war zone.

Such is the story of the photographer Boogie, whose gritty photography collection, "It's All Good," out now from New York's powerHouse Books, chronicles the lives of thugs, hustlers and addicts without artifice. Currently based in Brooklyn, N.Y., he was born and raised in Serbia, and was eventually mired waist-deep in that conflict-torn country's unremitting violence and war during the '90s. After serving his stint in the military and getting lucky with a lottery draw for a green card, he fled the country for safer environs, only to be pulled back into the violent battle for the soul's deliverance, this time in a drug-addicted New York that looks nothing like the megamall environs favored by Rudolph Guiliani, George Pataki and Michael Bloomberg. In fact, "It's All Good" is a visual document that would most likely give those three fits, filled as it is with could-give-a-fuck individuals living fix to fix, fight to fight, weapon to weapon....

READ THE INTERVIEW WITH BOOGIE (Note that because it's Salon, you have to wait through the ad you'll see first....)

Posted by: MIKE JOHNSTON, with thanks to Will

Charlie Didrickson found this link, with some of Boogie's photographs.
4:26 AM
Unknown