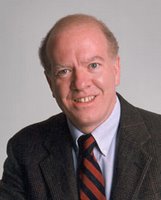 This year T.O.P. extends special recognition to Wilhelm Imaging Research and its founder, Henry Wilhelm, the famed print permanence researcher and consumer gadfly. He took the credibility he earned over years of working on permanence issues with traditional materials, and leveraged that to basically transform an industry. No, not him alone, and yes, there were good commercial reasons for the printer vendors to respond, and yes, one can quibble from now til doomsday about the particular measures he uses. But in the end, he's the one who did the most to make digital photography a viable medium for serious users.

Why "digital photography" and not just "inkjet printing"? Because without the latter, there would still be no practical way for the vast majority of serious digital photographers to also be serious printmakers. Yesterday's T.O.P. Accessory Award for pigment inksets brings this up with perfect clarity. Without Henry Wilhelm and his long-running campaign of evidence-based constructive criticism and consciousness raising, none of those products would exist.

Until inkjet print materials achieved a modicum of both quality and permanence, photography was heading for an awkward limbo. Digital cameras had come to dominate, but the tools that would allow an ordinary user to make a fine print from a digital source file didn’t exist—nor would they have come to exist any time soon, had manufacturers only the untutored preferences of the mass market to guide their product development. In praising Wilhelm, we mean no slight to the many talented engineers behind today's printers. But without Wilhelm’s skill and persistence in shining the spotlight where it was needed, those talents would have been directed elsewhere.

Nor is the permanence problem fully solved. Dip into the technical literature, and you’ll come away appreciating just how much we still don’t know about what it takes to make prints that will last not just in controlled-environment storage, but under realistic display conditions. As time goes by, we are sure to discover new failure modes not captured by current test methods. But today’s best inkjet materials are, without question, vastly more permanent than anyone imagined possible only a short time ago, and stable enough to provide a robust foundation for the printmaker’s craft. That's Wilhelm's doing.

We all owe Henry Wilhelm—big time.