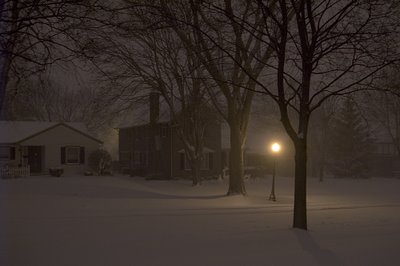 Here in Wisconsin we awoke to a beautiful falling snow, the first of the season. The snow's late arrival on the first of the new month reminds me of 2000, when we had 50 inches of snow in the month of December—second highest monthly total on record for this area—and almost none at all during the rest of the winter.

Zander gets treated to an incredibly rare snow day—both the amount and the timing of the snows has to be just right for the schools to close in Wisconsin—and the puppy, who has never experienced snow before, was afraid to go out at first. She kept whimpering and high-tailing it back to the door, and she pooped on the deck (we know what that makes it, arrrrr), which had me out there with the old plastic bag. Later, she snuck out past me when I was taking these pictures and went tearing around delightedly before succumbing to my alpha-dog authority and returning on command. 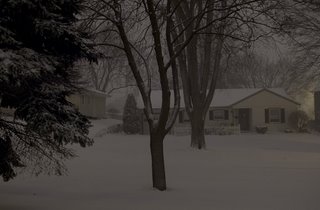 When I was younger, I would have been out trudging around in a pretty new snowfall like this, camera under my coat or tripod across my shoulder, seeing the snow as a photo-opportunity, and somewhere around here I have a lovely black-and-white 4x5 negative of a setting moon at dawn over Rock Creek Parkway, in Washington, D.C., after an ice storm, a shot I nearly froze my nodal points off to get. There's nothing wrong with exercise, of course, but as the years have passed I've realized that that's just not the kind of photographer I am. I took these from the front door, just before dawn, toasty and warm in robe and slippers.

Posted by: MIKE JOHNSTON
5:26 AM
Unknown