Among existing cameras, I'm pretty happy with my current Konica-Minolta 7D / K-M 28–75mm ƒ/2.8 setup, despite the relatively alarming fact that the company beat a hasty exit from the camera biz last year. Reasons: results. I don't really care for the camera as an object or an operating experience—well, with the exception of the much-better-than-average viewfinder—but the results are just great. I'd have to know that a replacement could do at least as well in terms of color accuracy and tonal scale and practical features before I'd be willing to jump. And by the way, I think a large part of my satisfaction has to do with the lens, or the way this lens works with this camera. I bought a Sigma 30mm ƒ/1.4 for the 7D, and the results, while good, just didn't have quite the same richness of color, and there was a lot more CA in some situations. So it ain't entirely the camera that's good—it's the combo.

All the cameras I lust after—still—are film cameras. This is downright strange, as I don't shoot film any more. Well, there's nothing stopping me from doing so, so I can still think about it. Actually, there is something stopping me from doing so: the fact that digital just plain makes it possible for me to take better pictures in a wider variety of situations. The advantages are impossible to ignore. I still shoot Tri-X in my dreams, though. (Another confession: I actually do dream of shooting pictures.)

Among postulated cameras, here's the crux of my dilemma: there's a sort of ordering of features that are important to me, each of which sort of rules out a large portion of the existing market.

Anti-shake in the body. I've said before, and I'll say again, that this may not be a crucial feature for every photographer. But it is for me. All that anti-shake (a.k.a. Image Stabilization, a.k.a. Vibration Reduction, etc.) does is take you 1.5 to 3 stops into tripod territory, with many of the same limitations. But when I look through my favorite shots of the past two years, it's just amazing how many of them were either helped, or were made possible, by this wonderful feature. Again: not a deal-breaker for many photographers. But a must for me. And so all cameras that don't have this feature are ruled out. All that's left in the current landscape are the Pentax K100D and K10D, and the Sony Alpha A100. (Right? Correct me if I'm wrong.) 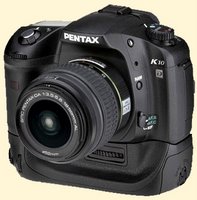 A good viewfinder. A viewfinder is just a pointing device. On a Speed Graphic, it's little circular eye-hole-peeper-thingy and a wire frame, a primitive system that works surprisingly well. Anyone coming to an entry-level DSLR from a digicam is going to be pleased by the nice big view, and entry-level DSLR viewfinders work perfectly adequately for pointing. There's no "problem" with any of them; they're good enough; the broad "market" in its tumblehome wisdom doesn't demand more, and I should humbly accede.

But screw that. I want better, dammit. So the Sony Alpha A100 and the Pentax K100D are ruled out here.

You'll not have failed to notice that this leave me all of one current option should I happen to be in the market to replace the 7D—the Pentax K10D. Which I have not yet even seen.

Responsiveness. A crucial camera feature. ("Responsiveness" just means how fast the camera does what you tell it to, and, secondarily, how fast it does what it does, such as, say, autofocus in low light.) The 7D is adequate, but just barely. Nikon seems to be paying special attention to this.

Sensor size. I'm partial to the APS-C, 1.5X crop, 24x15mm class of sensors. I find it is just about what I want for d.o.f. and pixel quality. And some of my favored lenses are APS-C only. So I would want a camera with this size sensor. Maybe in ten years, or fifteen, I'll have slowed down enough, and the cameras will have improved enough, that I'll be hankering after a "645"-size sensor. Not yet.

The future? Well, it's astonishing that I'm already thinking of the 7D, which is the fifth or sixth most expensive camera I've ever bought, as disposable—but it is, and I am. (It's not exactly up to me.) But in two or three years I'll probably be looking at the K10D, the next Sony SLR that's upmarket of the A100—that's assuming Sony in its inscrutable mega-corporation fickleness decides to stay in the DSLR market—the Olympus "E-2," and any possible future Canikon that puts anti-shake in the body.

And what, you might ask, of the "DMD"? A casualty of realism, alas: I've been in the photo biz for a few decades now, and I know that even if some manufacturer ever bites on this idea (what, a 10% possibility?), the chances they'll get it right are maybe 5%. And I'm not going to waste my life worrying about something that has a .5% chance of ever existing. (Well, I probably am, actually, but I don't need to 'fess to that here).

Dream cameras: they don't really exist any more. But we can always dream.