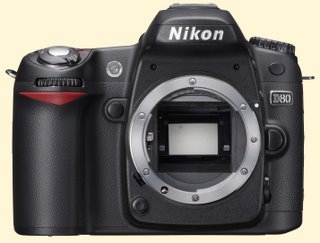 Winner
Nikon D80 (introduced August 9)—Despite stiff competition, the Nikon D80 nosed out in front of the pack as the best all-around camera introduced in 2006. More than a mere upgrade of the popular and competent D70[s], the up-to-the-minute, 10-MP D80 is a careful and thorough all-new design, with superb Nikon ergonomics in a body that is even more ideally sized and shaped than the D70. Nikon is on a roll with its outstanding recent camera designs, and continues to win points among camera buyers—and plaudits from the likes of us—for its unstinting downward migration of features and capabilities from its more professional models: the D80 inherits a surprising amount of technology from the D200, which in turn provides a surprisingly large dose of the capabilities of the full-tilt-boogie D2Xs. Build-quality is a cut above for the price-point (the Sony A100 and Canon Rebel XTi feel flimsy in comparison), responsiveness is excellent, and, importantly, there is evidence in the D80 that Nikon is giving serious consideration to the viewfinder, which remains a serious if somewhat under-criticized weakness of many entry-level DSLR designs. Although some (not us) may fault the D80 for having an APS-C size sensor, and others (including us) might still wish for in-camera VR (vibration reduction) at least as an option, the D80's astutely-judged mix of high image quality, responsiveness, ergonomics, and in-the-field usability mark it, if only by a small margin over its capable competition, as the year's standout.

Leica M8 (September 14th)—Although plagued with early problems, the first digital Leica M is an important bridge to the past, a much-needed rangefinder alternative to the SLR-style design that's becoming ubiquitous, and a step forward in terms of applying traditional controls and very high mechanical build quality to serious modern digital cameras. That it can be used with most Leica (and other M-mount) lenses is exciting and a huge plus. 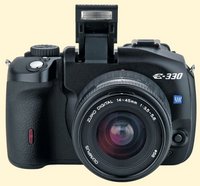 Olympus E-330 (January 26th)—The compact consumer 4/3rds DSLR is the first to offer full-time live preview on its LCD screen. Although not sufficiently appreciated by some reviewers, this is a feature that many photographers miss when switching from digicams to DSLRs. Olympus continues to lead the way when it comes to thinking creatively about digital camera design.

Pentax K10D (September 13th)—The first pro/semi-pro body from Pentax in many years and the first semi-pro DSLR from the company, the beautifully sculpted and very well-made K10D earns our admiration for its in-the-body SR (shake reduction), anti-dust mechanism, accessory grip, and weatherproofing—the only current 10-MP DSLR with all these features—and it gets extra points for its accompanying set of very useful, designed-for-digital compact primes.

Posted by: MIKE JOHNSTON, with thanks to dpreview.com for its "timeline" of new camera introductions
10:21 AM
Unknown