Word out of Japan today is that Pentax will be purchased by Hoya in 2007. (It's being pitched as a "merger," although Hoya is called in the press release the "merging company" and Pentax the "company to be merged," which I thought was a nice way of putting it.) Although photographers probably know Hoya only from its self-branded lens filters, it's one of the largest optical glass manufacturers in the world, supplying the glass blanks that many optical companies make into lenses. It also makes glass substrates for computer hard drives and has significant business in eyeglasses, intraoculars (replacement lenses surgically implanted in the eye), and other related medical technologies. Besides cameras, Pentax has ventured into medical equipment as well, making endoscopes and bionics among other things. Hoya's assets are roughly twice those of Pentax and it has about two and a half times as many employees. Recently, its profits have been significantly more robust. 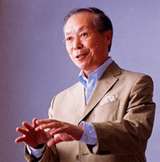 The integration will be completed by October of 2007 if all goes well. The current CEO of Pentax, Mr. Fumio Urano (right), will become Chairman of the Board, and the current President and CEO of Hoya, Mr. Hiroshi Suzuki, will be President and CEO of the new company, which will be called Hoya Pentax HD Corp. The new company will be organized around "a small headquarters with empowered business divisions."

And the upshot for us: Pentax Imaging will continue to make Pentax-branded cameras, with "...cost-competitiveness...strengthened by lowering production costs and focusing on unique, high-end products." (We especially like that last part.)

On paper this looks like a great merger, with both savings and synergies waiting to be realized. The Online Photographer congratulates Pentax and Hoya and wishes the new company strength, good fortune, and long life.