Pulp Nonfiction, Ripped from the Tabloids 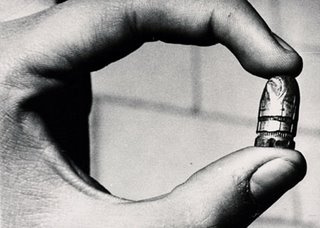 Enrique Metinides photographed his first dead body before he was 12. It was as if he had caught a fever, because after that he couldn’t stop. For years while he slept he kept his radio in Mexico City tuned to emergency stations so that he could be awakened by the latest news of disaster. He would often throw on his clothes and rush into the night to see yet another car wreck or fire or murder.

He found a cornucopia of gore: suicides, jumpers, accidental electrocutions and exploding gas tanks. (In that case petty thieves drove off from the pumps with the hose still inside their car.) We feel somehow we shouldn’t gawk. But how can we not?

Posted by: MIKE JOHNSTON, thanks to Adam McA.

Featured Comment by dennismook: In my 31-year police career, I spent 7 as a forensics detective in a medium-sized urban environment. I worked over 100 death investigations, photographing them all. From a self-inflicted shotgun wound to the head to being cut in half by a train and every way you could possibly think of dying, I had the responsibility of photographically documenting the scene as well as finding and collecting the evidence left behind.

The only way I found to survive, keep my psychological health and get the work done well was to develop a way to turn off all my emotions and only look at the tragedy before me in an academic and technical manner, not seeing a fellow human being who had lost his or her life in some grotesque manner. I had to learn to compartmentalize my life. However, I never got used to dealing with the children who were murdered. After becoming a father, I had to transfer to another assignment and do something else within the police department. I couldn't seem to break that emotional connection to a child.

My friends would have many questions about death investigations and many misconceptions. At one point, I made up a loose-leaf notebook of death scene photos so I could better explain how people die and how we go about investigating the deaths. I now think back on that notebook and remember how reality shocked those who looked at the photographs. Their shock was my reality...over and over again. Sometimes a very difficult job, but one that had to be done and done right every time—for the sake of the victim and their families.
7:44 AM
Unknown