A Banner Year for Big Cameras? 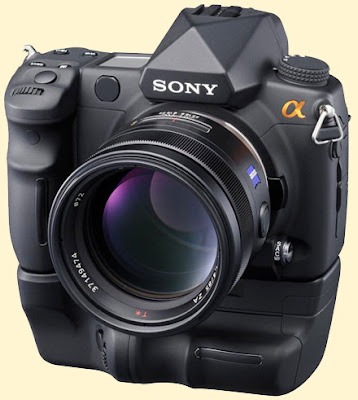 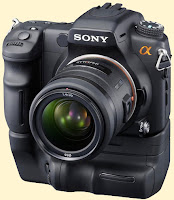 2007 is shaping up to be a banner year for top-end cameras. Not only is the new Canon EOS 1D Mark III now shipping, with its leading-edge high-ISO performance, but it looks like this year will finally see Sony filling out its fledgling line with two higher-end DSLRs—one paralleling the old Konica-Minolta 7D (right) and one situated above that, at flagship level (top)—which might or might not be full frame. Sony is releasing product pictures, but no specs yet.

Even more interesting rumors are swirling around Nikon. "According to the French magazine Réponses Photo (issue 183, June 2007)," went a recent post by one Charles Brugg on the DPReview Forums, "Nikon will soon bring out a new 'pro' camera. It will be available around the same time as the Rugby World Cup later this year." The poster goes on to report that "this new camera will use a 18.7MP sensor made by Sony, slightly smaller than full frame (1.1X) thus allowing further use of the classic F-mount."

This is all just scuttlebutt, so please don't ask me for more information. I just pass along what I hear. My contact at Nikon, for instance, is an illiterate guy named Gitchi who sweeps up under the counters where they solder the circuit boards. I'm sure he knows something, but then, I don't speak Japanese.

It looks like both Sonys and the Nikon might have image stabilization as well, although we will have to wait and see.

"Indeed, with regular special sheet film offerings from Ilford and Kodak and the East European manufacturers, large format camera builders like Keith Canham, Richard Ritter, Chamonix, and Lotus seem to be selling all the larger-than-8x10" cameras they can make and there is a brisk trade in ULF and banquet cameras on the used market."

Mike Replies: Okay, here we go. 2006. All DSLRs: about 6 million units sold. All film rangefinders from Leica and Cosina (Voigtlaender and Zeiss) combined: about 20,000 units. All ULF cameras (larger than 8x10") sold by the above four companies: I'm going to guess not more than 400 units between the four of them, and I'll even let you throw in Wisner, Phillips, and Gandolfi and anybody else you can think of.

Just a wild guess. What do you think?

Oren Adds: "I guess I'm one of the two people in the universe who found the headline strange.

"When I tell family or friends that I'm heading out with a big camera, it means a big wooden camera that makes pictures on big pieces of sheet film. It would never have occurred to me to call one of those Sonys a 'big camera,' no matter how bloated it is relative to those little sensors."

"Wisner's been reorganizing their operation, so I don't think he's sold many new cameras in the past year. In addition to those we've both mentioned, Ebony and Shen-Hao should be in there as well.

"400 ULF cameras? Maybe, but among ULF cameras that would be a banner year. I wonder how many are being sold in China, which seems to be the growing market."

Mike Adds: I wonder how many people in our audience have never seen a wooden ultra-large-format camera in person? (I'll never forget the sight of Fred Newman with his 20x24" Wisner...nor of David Alan Jay 'hiding' under its dark cloth when he wanted a break from the Photo East show crowds...).
1:55 PM
Unknown