Eolake has found a page on Cameras.co.uk, a digicam review site, that helpfully lists shutter lag times for a variety of digicams. As I hope I don't have to remind most readers here, shutter lag, a camera feature that is "hidden" from most nonphotographer consumers, is the measure of time between the button push and the actuation of the exposure. It's a basic aspect of camera responsiveness.

The Cameras.com.uk page mainly points up how really awful most digital p/s shutter lag times really are. I'd consider any shutter lag time north of a quarter of a second to be unacceptable for any type of general-use camera, no matter how basic or inexpensive. To put you in context, a "standard" pro film SLR has a shutter lag of about .06 sec., an amateur film SLR about .125 or .150, a mechanical Leica .018, and a Canon EOS RT with the metering plate pre-fired, about .008! Autofocusing times have complicated this measurement somewhat, but Imaging-Resource pegs a pre-focused Canon XTi DSLR at .105 sec., and a pre-focused Nikon D200 at .057. 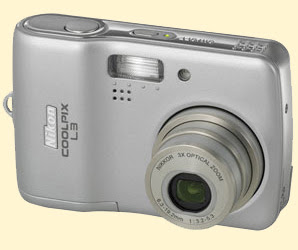 The Nikon Coolpix L3 has the dubious distinction of having the worst shutter lag of any camera listed by Cameras.co.uk. Between pressing the shutter release and the time the camera actually fires, the poor clueless buyers of this wretched excuse for a camera have plenty of time for a sip of coffee and a little idle conversation.
More than a half-second of shutter lag is really atrocious and makes photographing even slow-moving action a hit-and-miss affair, but the hall of shame awards go to the following woeful cameras: the Fuji Finepix A500, 1.6 sec.; Nikon Coolpix L3, worst of all at 1.8 sec.; Nikon Coolpix P3 and P4, 1.62 and 1.65 secs. respectively; Olympus FE-170, 1.62, and FE-270, 1.73; Pentax Optio S7, 1.61, and the Sony S500 at 1.08 sec. Educated consumers would drive these pathetic products right out of the market, so do your bit and continue to advise your friends and relatives about this too-often-overlooked aspect of camera performance.

Posted by: MIKE JOHNSTON with thanks to Eolake Stobblehouse

Featured Comment by Hoainam: Coincidentally, the New York Times recently had an article about shutter lag. Hopefully raising awareness about the issue will make consumers demand less shutter lag and manufacturers will respond accordingly. (Sheesh, why does it sound like I'm trying to save baby seals or something?)
7:38 AM
Unknown