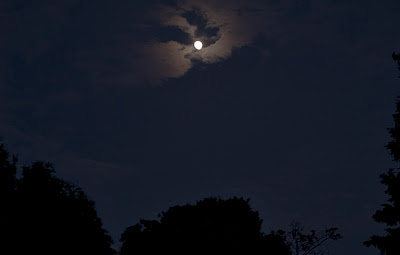 Every now and then when the moon is almost full I grab my camera. I think it's because I love the phrase "waxing gibbous moon." Waxing is the opposite of waning; it means it's getting bigger. And gibbous is the opposite, or the complement, of crescent; it means a partial moon larger than a half moon. I've always wanted to title a picture Waxing Gibbous Moon.

Two nights ago I took the camera out by the garage and took this. I tell myself in those situations that there's no time for a tripod. For this shot, I turned on "Anti-Shake" (actually, I never turn Anti-Shake off) and jammed the camera up against the garage door.

When I saw that the exposure wasn't totally sharp and the moon was still blown out (this would be a good application for two quick exposures blended with one of those actions that combines two exposures for extended dynamic range—I'm not just imagining that those exist, am I?), I had one of those "tiny epiphanies" of which my days are full—I realized I dislike tripods on principle. That is, I don't think of myself as a tripoddy kind of person, all finicky and particular. I'm an anti-tripodite. 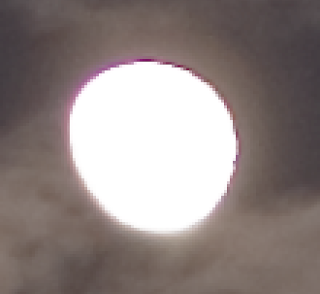 Real Purple: This unsharp waxing gibbous moon Kind of Blue moon
—a detail from the shot above—is also one of the few times I've ever
actually seen bonafide purple fringing from my 7D and 28–75mm lens.
I have a friend named Christopher Bailey who was once a house painter. I remember keeping him company once four stories above Georgetown. I couldn't leave the window, but Chris was scampering around on boards laid on scaffolding with nothing under him but sidewalk, dizzyingly far below. Now, I'm scared of heights, dramatically so, so just watching him had my stomach in knots. At one point I said, "Chris, aren't you afraid of falling?"

At that, he started jumping up and down on one of the boards, which flexed beneath him and then flung him upwards. He jumped on it like it was a trampoline. "Oh, I don't know," he said, "I just feel like if I fall, I'll get my hands on something."

Bingo. That's how I feel about steadying the camera. I'll use anything and everything to brace the camera on or against—mantelpieces, car windows, someone's back, whatever. I like to extemporize. More than that, I like to think of myself as someone who can extemporize. Even when I do use a tripod, I just jam the camera down on the top plate with my hands—I seldom actually attach the camera to the tripod head. What I realized the other night is that I avoid tripods just because of this self-conception I have—even when they're called for, and would be appropriate and useful. There was really no reason at all not to grab a tripod when I went inside to get the camera the other night.

So here's my resolution. The next time I shoot a waxing gibbous moon (granted, the shot above is another miss), I'm going to get the tripod out, and use it properly. In fact, I'm going to try to use my tripod more often in general. I don't care for "tripod snobs," but being an anti-tripod snob is no better. 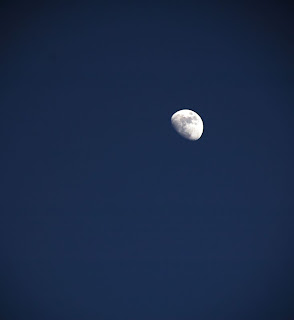 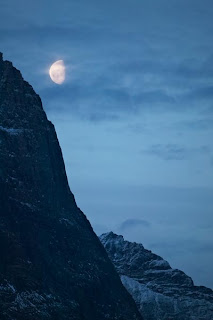 Featured Comment by DMayer: "While I agree with your comments both pro and con about both tripods and VR/IS/whatever, I'd like to humbly point out that the argument would be moot (mooot?) for moon shots. To successfully photograph the moon you have to shoot at a shutter speed fast enough to freeze the moon and to make the earth's movement negligible. At usual f-stops, the proper exposure would be fast enough to freeze the moon with a 'normal' lens in a shutter speed range that would allow your IS to be effective. Shoot slower, and a tripod may yield a sharper picture of everything else, but your moon would either be blurred or grossly overexposed. Cliff's WGM looks good at screen resolution, and was presumably shot at 200mm at a high ISO (I would guess around 800?) At this shutter speed some people may not need the VR, let alone a tripod, especially if you use the stabilization method that you (Mike) used for your moon shot. And let's not talk about the need for remotes and mirror lockup while on your tripod. Sort of takes away the spontaneity a little, eh? Yes, I do have a tripod (carbon fibre of course, sniff-sniff), a remote cord, and a usable MLU function on my camera, and do from time to time use these functions, but I also have VR lenses, and in a pinch which do you think would yield a more successful moon shot? (The smarta-answer is the tripod, used a couple days before the full moon around sunset, when the difference between the sky exposure and the moon is within the dynamic range of your sensor and the moon is close to the horizon. Luck has nothing to do with making a good photo.)"
2:50 PM
Unknown