Home » »Unlabelled » A Splash of Photo History Comes to Light

A Splash of Photo History Comes to Light 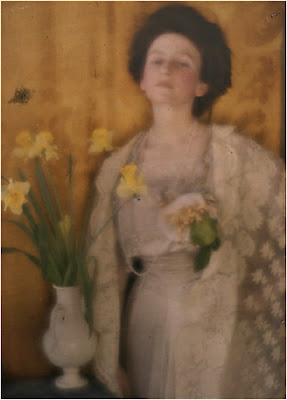 This century-old Edward Steichen autochrome, probably of Charlotte Spaulding,
has been discovered after decades in storage.
By Randy Kennedy, The New York Times

At first glance the two pictures seem to be gorgeous anachronisms, full-color blasts from the black-and-white world of 1908, the year Ford introduced the Model T and Theodore Roosevelt was nearing the end of his second term.

But they are genuine products of their time, rare ones, among the few surviving masterpieces from the earliest days of color photography, made using a process developed by the Lumière brothers in France and imported to the United States by the photographer Edward Steichen a century ago this year. They were taken by Steichen, probably in Buffalo, and are thought to be portraits of Charlotte Spaulding, a friend and student who became his luminous subject for the portraits, which resemble pointillist miniatures on glass.

Almost as intriguing as the pictures themselves, however, is the story of how they recently made their way from a house in Buffalo, where they apparently sat unseen for decades, to the collection of the George Eastman House in Rochester, one of the world’s leading photography museums, where they will be exhibited for the first time this fall....

Posted by: DAVID EMERICK
NOTE: There is also a good article about this at the Independent, called "Timeless exposure: 100-year-old colour photos discovered in attic." (I've misplaced the name of the reader who brought this one to my attention, but thanks to him. —MJ)
Illustrations: George Eastman House Collection
Featured Comment by Ken Tanaka: "They look wonderful and appear to be in terrific condition. I am glad that they're not (yet) in a private collection.

"So, a point of perspective. If Henry Wilhelm is accurate, our Epson Ultrachrome K3 prints will look just-printed fresh when they're the same age as these photographs."
7:20 AM
Unknown