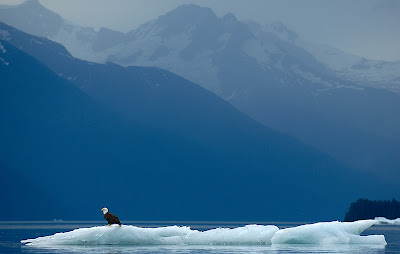 Lloyd Chambers, Eagle on Iceberg from kayak, Alaska’s inside passage, 2002
In a rather shocking turnaround, Lloyd L. Chambers of diglloyd recently announced that the upcoming EOS 1D Mk. III has him convinced. Check out his article "Goodbye Nikon?" As usual, it's an interesting, wide-ranging analysis. Especially interesting is his discussion, in the article, of what he feels is Canon's superior commitment to developing new prime lenses.

This is the most unexpected switcheroo since 2006, when landscape photographer and master dye transfer printer Charlie Cramer switched from his 4x5 Linhof to a $25,000, 39-megapixel PhaseOne medium-format digital back—and zoom lens—that he had tested and found was very close to the quality of the 4x5. Charlie reports that the biggest change in his shooting was that he went from about 500 film exposures per year (at $4 a pop) to 5400!

Posted by: MIKE JOHNSTON
3:52 AM
Unknown