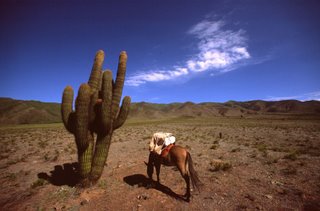 This picture was shot with a Canon 17mm lens on 35mm Velvia. There are plenty of corrections to be made, but I want only to show how a shot taken at an awkward-looking angle can be changed to appear in "normal" perspective again. If this can be done, I think there's a big advantage in using a very wide-angle lens to get everything you want into the picture (sometimes you don't have enough room, sometimes the horse you're riding on is too nervous and you get what you can) and then correcting back to a regular point of view. 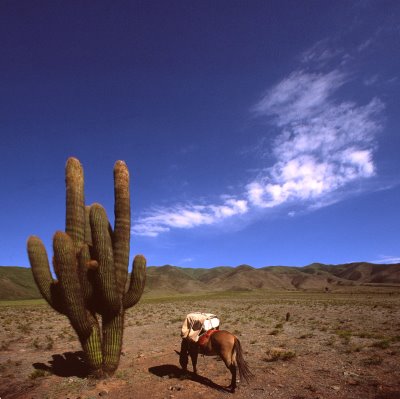 Perspective-corrected version
The original has the typical 35mm proportions. While the corrected version is almost square, it is much closer to the real proportions seen by the naked eye, and the mule and cactus poses are much closer to natural. This results from first enlarging your canvas size to get space to work with and then skewing the picture (like crazy and in every direction you feel like)
to get the verticals, horizontals and parallels right and then rescaling vertically because after correcting angles the shot looks flattened. The key of the game is "make it look natural." The skew command is an option in the Photoshop Edit>Transform menu. Pulling the image corners modifies angular scale (use it to make lines parallel), and moving the middle points of the sides of the picture changes the angles. Better to try it—it's difficult to make a short explanation.

This is far easier in terms of the picture not falling apart when resolution is higher (in this case, if you print big enough, the grain is clearly elongated), and when you don't crop too tight when shooting the original, because the skewing brings some of the corners in, and when you reframe and crop you lose some surrounding (I'd like some more foreground in this picture to work with).

When done sensibly, especially in city landscapes, this makes a huge impact in perception; things look a lot more balanced and less nervous to me. This picture is quite extreme, mostly because the lens angle of view and the taking angle, but I think it works as an example. It's obviously a matter of tastes, but the results are very interesting.

Posted by: MAX HERTELENDY
11:42 AM
Unknown