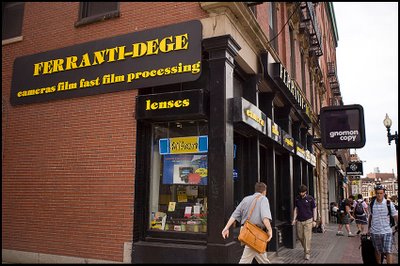 Got the sad news today that Ferranti-Dege in Cambridge, Mass. has closed its doors. It was a Harvard Square landmark for 51 years, operating on "Mass Ave" across the street from Harvard since 1955.

The closing came with little notice. Anthony Ferranti no doubt wanted little fanfare. His place had legions of fans, friends, students and customers. It was a beehive for photographers and budding photographers for decades. It was a Mecca for Boston area photo students, and was the stomping ground of the Tufts Photo Mafia. Many working pros today got their start there behind the counter, or working in the E6 or B&W labs, or from the constant flow of advice, opinions, dissent, and at times outright ranting from the staff. All at no charge.

The original store at 1286 wasn’t big enough (believe me, it was huge), so they opened up Ferranti-Dege Too a block away at 1300. In their heyday, for a couple of decades, Ferranti-Dege was the center of the photographic community in greater Boston. Even walking down the street, you could smell the place. They put their black & white lab in the basement of F&D Too. Like all of the old Harvard Square buildings, the basement actually extended underneath the sidewalk of Mass. Ave. Ferranti’s had an exhaust fan that blew the air from the lab out onto the sidewalk. People walking by or gawking in the window would be greeted with the smell of fixer. This was not lost on photo students at the time. It was a different time and place, and in some ways represents the height of silver based photography.

The audience created by F&D is enormous. There are too many working pros my dim memory can recall that frequented that place. Former alums Rick Mandelkorn, Max Belcher, and Mark Thayer. Constantine Manos was a Saturday morning regular, as were other Magnum photogs. Even Phil Levine would make it a point to peruse the windows at F&D Too (the little store, with the LF equipment). One of my fondest memories there was when we had an 11x14 Deardorff in the window. Someone had the presence of mind to position it towards the street and focus it on the passers-by in front of the window. I happened to be standing behind the counter when E.P. Levine happened along. He was dressed like JFK, with suit, cashmere overcoat and Fedora. I watched Phil do a double take, turn around, bend down and squint at the camera as he was obviously looking at the lens particulars—all upside down on the groundglass. Funny how you remember some things. Classic Cambridge, classic Boston, classic Phil, classic Ferranti’s. I am glad I got to spend some time there.

Tony closed up shop for good on Friday, October 13, 2006. He and his troupe will be missed.

Harvard Crimson article about the end of Ferranti-Dege
7:09 AM
Unknown