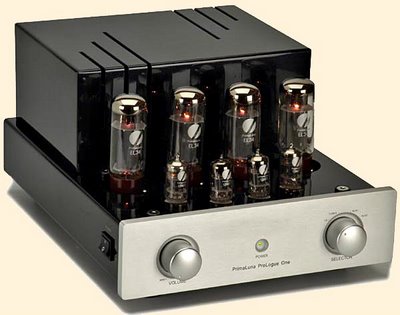 The best things in life are free, it's said. Such as, say, getting clean with your squeeze, watching your children grow, a long walk on a spectacular Fall day, taking in a sunset while sniffing a rose (which would make me sneeze, but never mind)—that sort of thing. And of course we all have our own preferences. Pleasure for you might be spotting a rare teal-tipped warbeldehoo on a hike in the rain forests of Brazil, or feeling the endorphins let go at mile 20 of a marathon, or re-reading Hume. (Personally, I wish I spoke another language so I could read Hume in translation; for some reason I have real trouble understanding him in English.)

On the list of life's mundane or quotidian pleasures, those that are material are thought to exist on a lower level: a bottle of your favorite libation, a shopping expedition with a recently fattened credit card, an "endless" evening of Texas hold-'em. Doubtless, all of us who tend toward connoisseurship have our own custom-tailored short lists of the material pleasures we favor, too. For me, those include small, light, naturally-aspirated four-cylinder cars with manual transmissions, watching a black-and-white print (sorry, but yes) come up in the developer tray, books, and wierd, wonderful music late at night on a tube amp, at low volume.

I don't actually own a tube amp myself at the moment, and I don't actually recommend a tube amp as your only source of power for music. The crackling rhythmic propulsion and crisper bass of a small British transistor amp generally better serves the '50s jazz I've favored for the past half-dozen years or so (thanks, Scott). (I also decidedly prefer acoustic-suspension speakers, which are essentially not made any more. Most people just plain can't hear bass.) And throughout most of their history, the care and feeding of tube amps has been something akin to keeping a vintage Indian or Triumph running—you know, a process thing. (Ahem.) Not to mention that the little brutes have traditionally represented very poor value for the dollar, euro, or pound.

But those drawbacks have diminished, thanks to the world's newfound relationship with the emerging capitalism of red China. At this historical moment you can buy modernized replicas of classic tube circuits in splendidly solid casework for half to a third of what they go for when they aren't being put together by recently re-energized segments of the Chinese peasantry. Among several available choices, PrimaLuna is first amongst equals. The little ProLogue One, in particular, is both a great little tube amp (which not all cheap tube amps are) and a very inexpensive tube amp (which very few good tube amps are). Inevitable reviewer blather to the contrary, you'll have to choose your speakers carefully; something "tube friendly" (meaning approximately 90dB sensitivity and no less than 6 ohms impedance in the lower frequencies) is indicated.

The sound of tubes is simply glorious, pure, caressing, and uniquely alive; if I didn't know better I'd say it's as good for shedding stress as a back massage. It attenuates you, lifts you up and draws you in. Especially at lower levels, where transistor amps have trouble not sounding dead, distant, and mechanical, tubes let music bloom and breathe.

Unless you're one of those sorry souls consumed by your own mongering after status, in which case I have pity for you but no sympathy, you really don't need more than the little model One. I don't even think it should be your only amp—just an option you should have to switch into your setup when you feel like it. In fact, there is really no justification for owning a tube amp at all...except, of course, for the fact that music reproduced with one in the wee hours of the night is a material pleasure par excellence, one of the good life's little treats.

Featured Comment by Mike Potter: Thanks for the post, Mike - I hadn't thought about tube amps in years. But don't leave us hangin'... :-) Now that T.O.P. has endorsed an integrated amp, what about a tuner and CD player to feed it, and speakers for it to drive? PrimLuna sounds like a pretty spiffy amp, particularly for the money.

Mike replies: For a source, I would warmly recommend this, which can be purchased here among (no doubt) other places, and fed from here. Despite being way too cheap for any sort of respect from "audiophools," it's really quite lively and musical and will give a lot of pleasure.

Speakers are quite another matter, as they all tend to do a few things right and many things wrong, and what one person finds charming will leave another cold. I would say I like about one out of every 50 pairs of speakers I hear, and that's knowing my own tastes, and what technical properties correlate to my tastes, quite well. The one thing I can say is that a speaker will sound better with the PrimaLuna if it is easier to drive (sort of analogous to that 1.8 liter 16-valve DOHC Toyota engine coming to life in the Lotus Elise whereas it's downright pedestrian in the much heavier cars Toyota puts it in). What you look for are two specs in particular—sensitivity, which will usually be given in decibels per watt at one meter (dB/w/m, although the notation isn't standardized as far as I can tell), and impedance. Generally speaking, a change of +/ 3 decibels in the sensitivity rating will correspond to a doubling or halving of amplifier power. Take a look at the specs for this speaker just as an example. It's rated at 91 dB/w/m, and the PrimaLuna is rated at 35 watts per channel. To get the same loudness with a speaker rated at 88 dB/w/m would require 70 wpc, and if your speaker has a sensitivity of 85 dB/w/m you would need 140 wpc. (This is why you can see very low-powered SET amps happily making music—they're paired, necessarily, with very high-sensitivity speakers, usually horns. A 5-wpc SET amp paired with a 106-dB/w/m speaker would have the same ability to play loudly as a 160-wpc amp and the 91-dB/w/m speaker linked above.) Complicating all this is the fact that power ratings and sensitivities are measured variously in non-standardized ways, and that other factors come into play in all specific amp/speaker pairings. But sensitivity is a good general indication of driveability.

The other is impedance. A tube amp likes to see a benign load , so look for a speaker with an impedance of 8 ohms. The problem here is that there's no such thing as an "8-ohm speaker" despite the sale lit—the load varies with frequency, and every plot of impedance looks like waves, with highs and lows. So what you want to see is a plot that doesn't dip below, say, 6 ohms in the lower frequencies (the left-hand side of the plot). 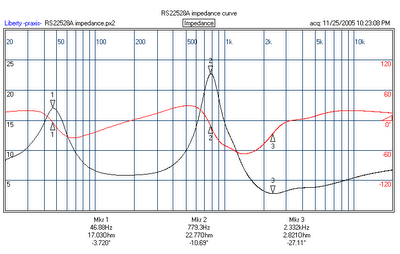 In the above plot, for example, note that the impedance dips way down (to 2.8 or so)...but only in the higher frequencies (around 2.2kHz). This particular speaker couldn't honestly be called an 8-ohm speaker, and yet it would be an easier load for an amp than many speakers advertised as 8-ohm that dipped to 5 ohms or less at 50 Hz or below.

An appropriate speaker for a medium-powered push-pull tube amp would have a sensitivity above 90 dB/w/m and an impedance that never drops below 6 ohms, and not below 8 ohms in the lowest frequencies. And, of course, you would have to like the way it sounds (g)
11:10 AM
Unknown