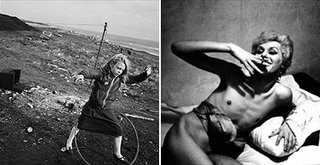 War, poverty and terrorism, or everyday intimate moments—the camera captures both global events and ordinary lives. Blake Morrison reflects on the history of 20th-century Europe as told in photographs.

As a student, like other students of the era, I stuck photographs of war atrocities round my bed. There was one in particular, which I'd cut from the Sunday Times colour magazine, depicting the My Lai massacre in Vietnam, when US soldiers led by Lieutenant William Calley murdered hundreds of civilians: the photo showed a heap of bloody corpses lying in a ditch. The photos attracted odd looks from less political-minded peers and they didn't do much for my sex life. But though the piety and ghoulishness of having them there now embarrasses me, they weren't merely right-on, in the way a Che Guevara poster would have been. The display was an expression of astonishment that something like this could have happened in our time—out there in the killing fields, away from the sanctuary of the campus. We weren't witnesses, as the photographer had been, but this was history and we were living through it and no one must be allowed to forget....

Posted by DAVID EMERICK
4:57 AM
Unknown