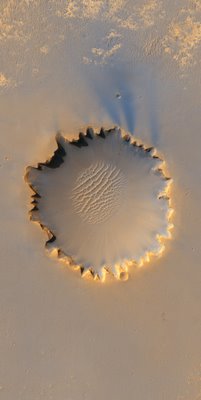 This spectacular, serenely beautiful photograph, compliments of the HiRISE high resolution camera on board the Mars Reconnaissance Orbiter spacecraft, shows Victoria Crater, an impact crater at Meridiani Planum, near the equator of Mars. The crater is approximately half a mile (800m) across.

Even more amazing is that the Mars Exploration Rover, "Opportunity," has been exploring Victoria Crater, and can actually be seen (along with some of its tracks) in the photograph (remember, it's taken from orbit). Check out Bad Astronomy for more, including links to the closeup pictures showing the rover.

This is unrelated, but, apropos of astronomy, I learned recently that our Sun and solar system are hurtling through space at some 43,000 mph, and that the direction it's heading is known by the pleasingly poetic term "the Apex of the Sun's Way." This phenomena was first described by astronomer William Herschel, whose son John, coincidentally, was the scientist who discovered that "hyposulfite of soda"—fixer—removed unexposed silver halides from emulsions, the last crucial puzzle piece in the process of making photographs permanent.

Posted by: MIKE JOHNSTON with thanks to Will S.