I was rather surprised that the post below this one turned out to be controversial, with many people writing in public comments and in private to me in a somewhat scornful vein.

Personally, I'm really glad there's an M8. To my way of thinking there are all kinds of good things about it. I won't try to list them all, but let me mention a few.

One thing that has struck me about the Digital Age is that newcomers who are exclusively digital don't have the option of buying really old cameras and initiating themselves into some of the many methods of the past. I know that for me, exploring the available modes of expression was an education, not to mention a blast. I still have in my archives the results of my brief sorties into Kodachrome, cyanotype, and still life with studio lighting; a nice picture I took with a toy camera (which actually got published), and an 8x10 portrait; to say nothing of projects like dismantling and restoring a press camera. I have larger projects I undertook on 4x5 Polaroid P/N film and in medium format black-and-white using an Exakta 66. None of these were the way I ended up working, but they all contributed to my education and, I think, enhanced my connection to the photographers of the past, and their work.

The other day I criticized Howard French for his juggling of many formats and methods, and among his responses was his admission that his "display work is overwhelmingly shot in black and white with the Rolleiflex." He added that he switches around "because I'm all about growth, and I don't like barriers." This latter is perfectly defensible; but for many older photographers the point would have been what he said in his first statement—experimentation made them familar with many ways of working, and they tended to hone in on what worked, and continued to develop and refine that, discarding the rest. (If they were Howard, in other words, they would have been grateful to find their own most natural technique and simply settled there.) Sometimes I reflect on what a shame it is that newcomers to photography will no longer have to learn how to keep a Hasselblad from freezing up, or choose between the competing options for developing sheet film streak- and mottle-free, or learn camera movements. It's not like we haven't gained a lot too, so I'm not moaning. It's just that a lot that I thought was part of the potential of the experience of being a photographer is no longer really there. 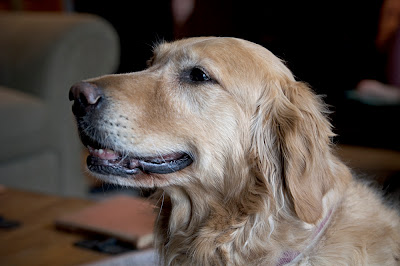 Beautiful Samba, age six, dying of cancer
I shot exclusively with an M6 for about a year and a half, some 15 years ago. I've said before that the camera itself was among my teachers in photography, and I still think so. It demanded a different way of looking, of responding, of appreciating the work of others—a different way of thinking. True, a lot of M8 buyers will use their fancy toys no differently than they would use a big DSLR or a Rolleiflex, but that's their loss. "Getting to grips" with an M Leica (the phrase is Andrew Mattheson's) was one of the pleasures of learning the old art, and was among its rewards. Personally, I'm glad the M8 is there to carry the M "way" into the new paradigm.

That's one thing. Another is that I'm glad that a camera maker can be so inventive, so different, in a market that is turning out to be so disappointingly repetitive (or, as I used to spell it, "repetetititive"). Basically, the Canon T90 stamped its design DNA indelibly into everything that came after it, a style of device that my friend Bill Pierce dubbed "Wunderplastik." Wunderplastik and the point-and-shoot are overwhelmingly the style choices available in digital cameras, and every design outlier is a rebel to be valued. Maybe an M-style digital was just Leica's best choice, but still, there's no denying it's very different from the norm. When there's nothing but conformity abroad in the land, nonconformity is more, not less, crucial to vitality.

I'm thankful that there are categories of cameras that don't accept zoom lenses. Again, being forced to work for at least a while with one or two single-focal length lenses is a teaching moment, an eye-opener, a dimension of one's growth in this art. It's good that there are a few high-quality digital sensors that don't lend themselves to being used with the ever-more-ubiquitous zoom. 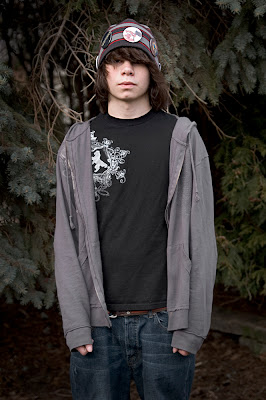 Zander at 14
I'll mention only one more, which is that I'm happy for those people whom the M8 hits square on the bull's-eye. I noted an item on Lyra Research the other day noting that "By late 2008 or early 2009, the cumulative number of camera phones shipped will surpass the cumulative number of both conventional and digital cameras shipped in the entire history of photography...." To which I responded with a big fat harrumph, thinking to myself, yeah, but what percentage of the work I care about will be done with them? Almost none, most likely. What matters to me is not that there's a camera in every home, not that the market for camera-type devices grows to the size of the market for toothbrushes, but that the few people who will be doing great photography have the tools that fit them, so they can do their work.

P.S. The pictures here weren't taken with a rangefinder, but with my trusty K-M 7D and, yes, a zoom lens, the Tamron-made K-M 28–75mm. They're there simply as decoration, to break up the "gray matter" of the text.

Featured Comment by nextSibling: I mainly shoot sports and social events, and a bit of mediocre street photography, these days. Nothing that's ever likely to find its way to a gallery or make me a living, and that's how I like it. In the last couple of months I've used my Pentax DSLRs, an FM2n, an Olympus XA, an Olympus Stylus Epic, a Rolleiflex, a Fuji 6x8 rangefinder, spent (wasted) far too much time playing around in Photoshop, and processed a few rolls of 120 Tri-X in Diafine.

What I've come to realise is that we're living in a golden age of photography. However one wants to pursue it. Someone like me with little talent and an unremarkable income can play around like this more easily and accessibly than ever before, just for the fun of of it and with no obligations. The web allows us to share our results, however unexciting, should we wish to, like never possible just a few years ago.

It's all rather wonderful, whatever we do. Whenever the next interesting thing comes along, I'll be jumping on the bandwagon (DP-1, I'm looking at you). The only reason I don't have an M8 is the price tag.
12:03 PM
Unknown