Well, naturally I've gotten raked over the coals in many of the Leica forums this morning, for insufficient worship (here and here) of the M8. I'm getting called names, insulted, denigrated, accused of name dropping and bias and of having no qualifications, and of course everything I wrote was outrageously wrong in nine kinds of ways—one guy called my report "piffle" and another jumped in and listed the several specific kinds of piffle it was. (To another it was "tripe." Well, which is it, piffle or tripe? I'm afraid that's something they're going to have to work out amongst themselves.)

This is par for the course, and it's why Sean Reid (who has a large amount of editorial material about the M8 at his site) is wrong when he suggests that the "religion" analogy is a red herring. With some Leicaphiles, as with religion, if you're not a true believer then you're automatically an apostate. There's no such thing as the moderate middle ground. You really can't insert enough qualifiers or make the criticisms gentle enough—either you believe, or you suck.

I'm sorry if I upset anyone. It's really not such a big deal, though. The M8 is nice. I was disappointed, is all. I expected to like it better.

Of course, the over-the-top nature of some of the responses make me wonder if some of the acolytes don't themselves have doubts. If you're really secure about a decision you've made, why get so threatened just because some guy on the internet doesn't agree?

A much more secure and confident response came from my M8-toting friend Kent, whose response was to send me a bunch of pictures.

The attached note said, "I love this thing, warts and all." 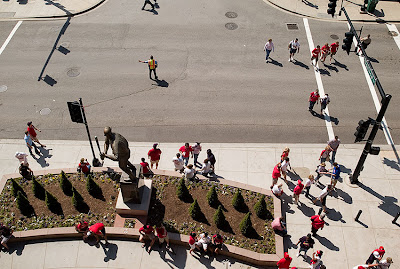 Posted by: MIKE JOHNSTON
7:44 AM
Unknown