The Joshua Bell Experiment and Photography

A number of people were understandably strongly affected by the article linked in the previous post, and for good reason. It really raises a huge welter of various issues about art, attention, delectation, and appreciation. It cuts to something elemental about how we spend our lives, and that can be an emotional subject.

There were a lot of interesting comments. Reader Michael Seltzer said:

"Another thing I wondered about was the numbers. Apparently about 30 or so people actually gave money and/or stopped to listen. That's out of 1100 people total. That's about 3%. I wonder what percentage, of the total population that exists, go to see him in concert. It may be that he reached a bigger audience (percentage-wise) on the street than in the concert hall."

It's an interesting issue. For years I worked for magazines, which live and die by direct mail, and in that world—for the magazine I worked for at least—3% was considered a very good return on a mailing. Two percent was adequate. About 1.5% was our cutoff point—below that, we would not rent, or mail to, a particular list again. And 4.5% was about the best we ever did (it was View Camera magazine's list, if I remember correctly). The only reason we sold the magazine on the newsstand—otherwise a zero-profit proposition—was that we got about a 4% "conversion" of newsstand buyers to subscribers, which was good.

As another referent, on March 29th (just picking a day out of the hat) this blog got 11,550 hits from 8,458 unique visitors, and 32 people left comments—quite a bit worse than 3%. Of course, to be fair, I did better when I asked for comments a few days after that, in the "Please Don't Make Fun of Me, Please" post.

As Joshua Bell said at the end of the article, he made about $40 an hour busking (a "busker" is defined as "a person who entertains people for money in public places, as by singing or dancing"), which would be enough for him to survive on if he had to. That seems to agree with the 3% response rate being pretty decent. 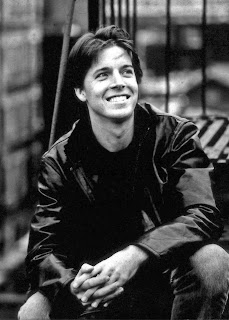 Violinist Joshua Bell
Another thing that wasn't discussed was that they placed him at a Metro entrance, which would seem to me to select for people who are actively en route from one place to another...many of whom could be expected to be on a schedule of some sort, especially in downtown Washington. I lived in Washington for many years, and I can tell you that, despite the popular reputation of politicians as shady and lazy or worse, Washington is full of "type A personalities" who are very task-oriented, very career-focused, and work very hard as a matter of course. I would bet money that Washingtonians work as long in a "typical" work week as people anywhere else in the country—sixty- and seventy-hour work weeks are not uncommon. The town just naturally attracts that type of person. In a more "task neutral" placement—for instance, where there are large numbers of sightseers or loiterers—he might have attracted more active listeners.

And, since crowds attract crowds, putting him at a place where there was a chance of attracting the nucleus of a crowd may well have served to attract a bigger crowd. And if there had been a crowd, then the one person who recognized him could have "infected" the other bystanders with her information. "That's Joshua Bell, one of the most famous violinists in the world!" is information that would travel well amongst a tightly packed group of standing people, whereas in the experiment, only one person recognized him, and the only person close enough for her to tell was one of the producers of the piece. But if ten bystanders had surrounded her, we can assume she would have told them as well.

One thing that surprised me in reading the article is my absolute certainty that I personally would have stopped to listen. Maybe it's long training, or just the fact that I'm a navel-gazer by disposition, but I know that I cannot ignore music whenever and wherever I hear it, and I habitually, even reflexively, evaluate the "offerings" of street musicians when I hear them. One reason I can tell you that is because when I hear bad music on the street, I'm often eager to get away from it!

Off-topic? Maybe not
Finally, although a few people may have thought that the article was "off-topic," I'm not sure it was—I think it does indeed bring up ramifications for photography. The type of photography I practice, for instance. How many times in the course of your daily life and travels do you see something interesting that you think might make a good picture? And how many of those times do you actually take the time to stop and take a few? I think most people—even many visually literate people, including skilled amateur photographers—pass by picture opportunities all the time, simply because they're doing something else—working, or making their way through a list of errands, or on their way to an appointment, or attending to their kids or spouses. Most of the time, we, just like the people who passed Joshua Bell by in the subway, can't afford to stop and indulge our hobbies at any old time—we have to schedule that activity, in between our other obligations. Indeed, I think it takes a person with a certain kind of lifestyle to be able to drop everything, grab the camera, and spend ten, twenty, or thirty minutes responding to something unforeseen that they just happened across in the course of their daily life. Very busy, heavily scheduled people just can't do that, most of the time.

Consequently, I wonder how many of the people who walked past Bell with their heads down would have liked to stop and listen, but were thinking something like, "Can't stop, gotta stay focused, gotta resist temptation, gotta keep going...." I'll bet there were a few. And it's sometimes the same way with taking pictures, isn't it?