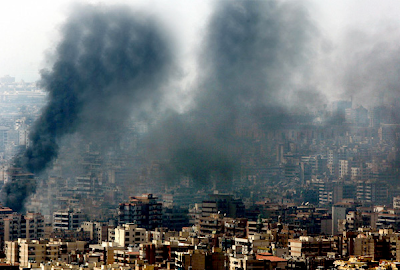 Adnan Hajj's infamous "cloned smoke" photograph that got him fired from Reuters News Service in 2006. Kind of makes you wonder if he would have gotten away with it if he'd simply done a better job....*
by Randy Dotinga, WIRED

A suite of photo-authentication tools under development by Adobe Systems could make it possible to match a digital photo to the camera that shot it, and to detect some improper manipulation of images, Wired News has learned.

Adobe plans to start rolling out the technology in a number of photo-authentication plug-ins for its Photoshop product beginning as early as 2008. The company is working with a leading digital forgery specialist at Dartmouth College, who met with the Associated Press last month.

(Click here for a gallery of famous fake photos.)

The push follows a media scandal over a doctored war photograph published by Reuters last year. The news agency has since announced that it's working with both Adobe and Canon to come up with ways to prevent a recurrence of the incident....

Posted by: MIKE JOHNSTON, thanks to Mark