Questioner: If the world were going to end tomorrow, would you take the day off from work?

Respondant: The world's not going to end tomorrow.

(The answer is non-responsive, of course. The whole point of making a question hypothetical is so you don't have to get sidetracked arguing about the premises and conditions. Don't they teach this in schools?) 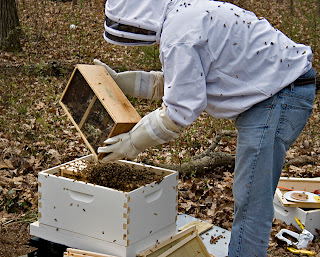 This issue about the bees is going to be interesting, and most of the questions I have are (as usual) hypothetical. If (provisional condition), as the most recent research suggests, it turns out that cell phones are responsible for CCD, and if (additional provisional condition) it could be demonstrated that this syndrome were going to be total, causing the collapse of human agriculture and resulting in widespread starvation, would the world's governments have the will to ban cell phones and destroy the cell phone industry? Or would we politicize the premises and gab our way straight to perdition? Hypothetical question.

One premise here that's not conditional is the importance of bees. Not to nature—to us. Here's something Albert Einstein supposedly said: "No bees, no food for mankind. The bee is the basis of life on this earth." Another quote ascribed to Einstein: "If the bee disappeared off the surface of the globe then man would only have four years of life left. No more bees, no more pollination, no more plants, no more animals, no more man."

The content of these statements is true enough—bees are essential to agriculture—but the arguments over the premises are going to be fierce. What's killing the bees? (Genetically modified crops and pesticides have also come under scrutiny for blame.) How important are bees? Unlike, say, puppies, or panda bears, most people don't have any attachment to bees. There's no helpful sentimental construct or anthropomorphic link to fit them to. (Another small trouble is that it's doubtful Einstein ever made the abovementioned statements, at least according to his most recent biographer, Walter Isaacson, former editor of TIME magazine. Einstein is one of the most frequent misattributions for quotations; whenever someone has some point to make that needs the indisputable imprimatur of science, one quick and easy way to secure such an endorsement is to ascribe it to Einstein. What they're trying to do is subvert the idiotic arguments about premises we should all know well enough to take for granted.)

When the premise seems absurd—and you only wish it were
The other side of this coin is illustrated heartrendingly by some of the responses to the calamity Monday at Virginia Tech. An item from the New York Times: "'As a parent, I am totally outraged,' said Fran Bernhards of Sterling, Va., whose daughter Kirsten attends Virginia Polytechnic Institute and State University, as it is formally known. 'I would like to know why the university did not immediately shut down.'"

Before the fact, the hypothetical would have had to have been constructed like this: "If you knew in advance that a shadowy anonymous murderer were going to go on a killing rampage unprecendented in modern society hours after either he or someone else murdered two people in a dorm room, would you try to close down a thriving institution of some 34,000 people (24,000 students, 10,000 university employees) after the first two murders had occurred?"

I suppose you might, although we could argue as to whether such a move would be either feasible or effective. The problem with the question is that, lacking foreknowledge, any sane person would simply have to dispute the stated condition. As a premise, it appears to be nearly as absurd as saying "If the world were going to end tomorrow...." There's utterly no way anyone could have foreseen that 30 more murders would follow the first two. Not only is it atypical, it had literally never happened before. Murders happen every day; like it or not, they do. But the police aren't in the habit of shutting down a whole city or town after a single murder, and you can't shut down a whole huge campus after two, either. It wouldn't be rational. In advance of the event, it barely makes sense even to consider it...except as a hypothetical.

If only that's all it had been. Fran Bernhards' outrage is completely understandable, but its nature is psychological—it's the result of fear and a desperate desire to believe that the horrific event of Monday was a) foreseeable and b) preventable, if only someone who should have known better or done something differently had acted in a different way. It's a desperately fond hope, something most of us would dearly love to be able to believe. Regrettably, the more probable reality is that random violence of such magnitude is unforeseeable and unpreventable, rather than the result of a essentially benevolent authority simply making a mistake.

ADDENDUM: I've disallowed a number of the comments about bees. Not because I don't appreciate learning about them, but because I'm feeling a bit...wounded. Rightly or wrongly, I fancy that I'm at least a fair-to-middling writer, with an above-average ability to express myself clearly. But here in this post I went way out of my way to explain exactly how, and why, my hypothetical question was not about bees. It was about responses to threats.

You know, like how the first question is not about whether the world will end tomorrow?

I guess that was not clear. I suppose I am not as articulate as I think I am. (Actually, for many years, one of the words I could never quite remember, and thus typically stumbed over in conversation, was "articulate." Maybe the gods were trying to tell me something?)

Anyway, thank you, but let's talk about the bees some other time. VT was what was really on my mind.
5:01 AM
Unknown