Home » »Unlabelled » How Photojournalism Is

"A news photograph is a statement, like a spoken or written one, subject to interpretation and evaluation, but as capable of being honest as any verbal statement...."

I had to scrounge long and hard to find an clear example of image manipulation in my files, but here it is—this is a paperback book cover I once did, and below it the original file. 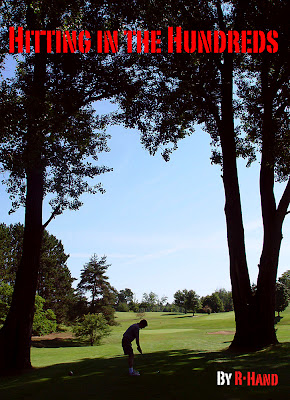 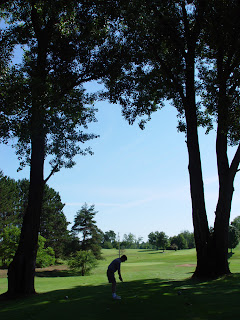 As you can see, I've taken some liberties with reporting the telephone pole that was sprouting from the golfer's neck. (You can click on either image to examine them more closely.) Of course in my usage of this picture here, it falls solidly into the category of photo-illustration, not reportage. But it makes a nice, if modest, point: that even a very minor change is enough to cross the yawning chasm that's supposed to exist between photo-illustration and reportage.

In my experience, some people never learn how to really look at photojournalism, because they're too preoccupied with pictorial prettiness; they get distracted by the ugly details and bad juxtapositions and the sometimes poor technique of photojournalistic pictures. You need to learn to see past that stuff to see into the essence of what's being reported. (And by the way, I certainly can't agree with the commenters who've asserted that every photograph is a fiction, any more than I believe that reality is a dream. A news photograph is a statement, like a spoken or written one, subject to interpretation and evaluation, but as capable of being honest as any verbal statement.) Photojournalism is rougher, rawer, often less organized and composed. That's natural. It's just a different form of photography.

One thing that I count among our losses these days is something that I seldom see mentioned. It's become a truism that photographs have always been doctored, were often faked, and always had the potential to be false, and that's true—but it's also true that deceit in an analog photograph was much harder to accomplish and much easier to detect. Consequently, one of the chief aims and rare prizes of photography was finding real situations that were visually remarkable—it was that assumption that the things photographed existed in the world just the way they looked that lent them much of their charm and strangeness. Now, of course, with so many more "images" become naught but photo-illustrations, so much less transparently, this manner of enjoying pictures has been diminished. 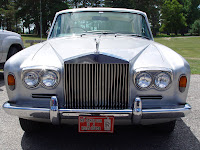 As an (again, modest) example of what I'm talking about, consider the picture to the left. I think it's funny only because it's true. In the days of analog, the joke would have been difficult to fake in "post," at least without a fairly onerous amount of work. It would be trivial to create the joke in post-processing with digital. (What joke? Click on the picture and look at the license plate.) In this case it's pictured just as I saw it—no manipulation. How do you know? Because I said so, and ultimately you either take my word where my "statements" are concerned, or you decide not to. That's how it is with photojournalism.

Featured Comment by Blork: The statement that "all photographs are lies" is useful for people who like to sit up all night in (formerly) smoky cafés pondering metaphysics, but it isn't useful for determining guidelines in the "real world" for the separation of photography and photo illustration.

Not to be overly cynical, but photography is the "easy art"—particularly these days, with the ubiquity of digital. So we're working in a medium that is saturated with millions of essentially meaningless images. We're inundated with photographic images in newspapers, magazines, online, on billboards, sidewalk advertising, etc. Everybody and his dog has a digital camera and is uploading to Flickr and similar sites. Thousands of "photo a day" photo blogs are out there, where people post a photo every day, whether they have something worth posting or not.

What gets lost in there is the idea of contemplating the image. As you say, people get hung up on "prettiness," so endless overprocessed HDR images get more eyeballs and are more highly ranked than images that are actually about something but require more than three seconds of eyeball time to "get."

Oh dear. I think I'm falling into a rant, so I'll stop right there. Suffice to say that your removal of the offending pole in the book cover image is a non-issue. The photo is "about" setting the stage for a golf book; it's not about that specific person on that specific hole at that specific time.
2:32 PM
Unknown