Home » »Unlabelled » The Man Who Made Mapplethorpe

The Man Who Made Mapplethorpe 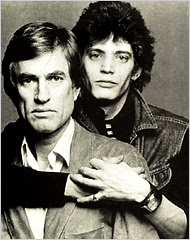 Tall, handsome and rich would be one way to describe Sam Wagstaff, a legendary figure in the international art world of the 1970s and ’80s. Urbane is another. Iconoclastic, certainly. And glamorous, without a doubt. But the word that keeps cropping up in “Black White + Gray,” a new documentary about Mr. Wagstaff by a first-time director, James Crump, that will be shown at the Tribeca Film Festival next week, is “visionary.”

Mr. Wagstaff was one of the first private art collectors to start buying photographs as early as 1973, long before there was a serious market for them. His photography collection came to be regarded not only for its scholarship. It was also original and unorthodox, and turned out to be extremely valuable. Mr. Wagstaff sold it to the J. Paul Getty Museum in 1984 for $5 million, a fortune at the time, establishing that institution’s collection of photographs, now among the finest in the world....

Posted by: DAVID EMERICK
6:11 AM
Unknown