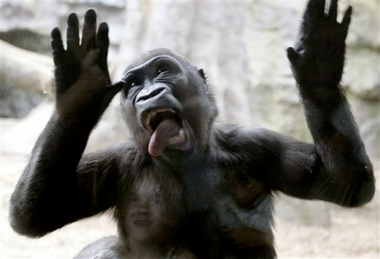 The Rev. Fred Phelps of Westboro Baptist Church, seen here articulating the word of God as he understands it, has announced that his flock will picket the funerals of the Virginia Tech victims with signs saying things like "You're Going to Hell" and "God Hates You." A Church spokesperson told CBS News, "The evidence is they were not Christian. God does not do that to his servants."
Another important aspect of ethical reportage is accurate captioning. Real pictures with fake captions is a common enough comic trope—whole humor books are made out of the idea—but of course misleading, mistaken, or mismatched captions can communicate inaccuracies as easily as manipulation of the photograph itself.

Gisele Freund discusses this (and many other aspects of the misuse of photographs) in her 1974 book Photographie et Société:

"Few photojournalists...are able to impose their own points of view. It takes very little on the part of an editor to give photographs a meaning diametrically opposed to the photographer's intention. I experienced this problem from the outset of my career. Before the Second World War, share trading at the Paris stock exchange still took place outdoors, under the arcades. One day I took a series of photographs there, using a certain stockbroker as my principal target. Sometimes smiling, sometimes distressed, he was always mopping the sweat from his round face and urging the crowd with sweeping gestures. I sent these photographs to several European magazines with the harmeless title, 'Snapshots of the Paris Stock Exchange.' Sometime later, I received clippings from a Belgian newspaper which, to my surprise, had printed my photographs with a headline reading: 'Rise in the Paris Stock Exchange: stocks reach fabulous prices.' Thanks to some clever captions, my innocent little story took on the air of a financial event. My astonishment bordered on shock when I discovered the same photographs sometime later in a German newspaper with yet another caption: 'Panic at the Paris Stock Exchange: fortunes collapse, thousands are ruined.' My photographs illustrated perfectly the stockbroker's despair and the speculator's panic as stock value dropped. The two publications had used my photographs in opposite ways, each according to its own purpose. The objectivity of a photograph is only an illusion. The captions that provide the commentary can change the meaning entirely."*

The caption under the top picture is a real news item, from last week (the Church has since called off its pickets of the VT victims' funerals after being offered radio time, according to godhatesamerica.com.) But of course it doesn't actually go with that picture. The real "Reverend" Phelps is at left—sorry for slandering the gorilla. Here's the real caption, from the AP:

Kimani, a 2-year old western lowland gorilla, presses her face against the glass of the enclosure at the Franklin Park Zoo in Boston, Sunday, April 22, 2007. The zoo held special activities and workshops in conjunction with Earth Day on Sunday. (AP Photo/Michael Dwyer)

*Gisele Freund, Photography and Society, Boston: David R. Godine, 1980, p. 162 ff. The book is unfortunately long out of print. I once tried to revive it, and got as far as discussing it with a VP from Godine. Unfortunately, we concluded that the rights and permissions would be very difficult, if not impossible, to secure. That's too bad; it's a wonderful little book, one that more photographers should be familiar with.

Featured Comment by Chris Gibbs: And this article speaks for itself!

Featured Comment by Yoram Nevo: Can't remember who said: "a picture is worth a thousand words, but a picture without a few words beneath it is worth nothing."
4:38 AM
Unknown