More about the Ebony SV Wholeplate

A few weeks ago we did a brief post about a mysterious new camera. So how did that whole plate camera come to suddenly make its appearance in the Ebony catalog?

The short answer is that two people placed orders for cameras to be custom-built in this format. Who would do that? Why? And what’s involved in obtaining a special camera like this?

History
First, a bit of context. The 6½ x 8½-inch format dates back to the beginning of photography, when Daguerre chose that size for his “daguerreotype” plates. That “whole plate” size, along with fractional variations on it, became well established during the brief but vigorous flowering of the daguerreotype; together with the half plate and quarter plate sizes, it survived through the succeeding glass plate era and into the era of cut sheet film in the twentieth century. Judged by the availability of new cameras, whole plate remained an important format in the United States at least into the 1930s, though after World War II it was rapidly eclipsed by 8x10. The format remained in common use far later in Japan, however, with new yatsugiri cameras and adapter backs being offered at least into the 1970s.

Today, whole plate is of interest primarily to photographers who like to make contact prints, and to compose the picture in the intended final print size at the time of exposure. Among contact printing aficionados, some find the slightly smaller size and more elongated proportions of the 6.5 x 8.5" negative more pleasing than the larger, squarer shape of the more familiar 8x10 format. Compared on the one hand to smaller and on the other to larger sizes, whole plate is also unusual in that the prints typically are practical and pleasing both in the hand and on the wall.

The typical whole plate user works with vintage cameras and film holders that have been patched, refurbished and adapted as needed. The biggest ongoing challenge has been obtaining film; for years, those who work in the format have obtained film by hook and by crook, sometimes cutting down 8x10 film in our own darkrooms and sometimes taking advantage of an ever-changing mix of special order and third-party cutting arrangements.

'Odd Formats'
Recent months have seen new interest and activity in whole plate. Ironically, this new activity can be traced to a near-catastrophe: the bankruptcy of Ilford Imaging in 2004, part of a wave of consolidation in film manufacturing with the rapid transition of the mass market to digital photography. Fortunately, Ilford was saved from liquidation when a group of its senior managers succeeded in purchasing the company’s monochrome-related assets and reestablishing a slimmed-down company under the Ilford Photo / Harman Technology name.

As part of re-establishing Ilford on a sustainable basis, the Harman management team terminated the predecessor company’s practice of selling rolls of uncut sheet film stock at bargain prices to third-party finishers, thus eliminating a key source of supply for users of sheet film in odd formats. Yet at the same time, they recognized that black and white film was now a niche market in which responsiveness to special requirements had taken on increased importance. In response to vocal feedback from odd-format users, Ilford/Harman launched a program which aggregates small orders for odd sheet film sizes through a network of select dealers for a yearly special production run, enabling users to obtain Ilford film in these sizes without having to spend thousands of dollars to meet the usual minimum order quantity for a special cut.

As plans for the first production cycle under the new program were being made in late 2005 and early 2006, a group of us with an interest in whole plate petitioned Ilford to include our favorite format in the program, and were thrilled when the response was positive. 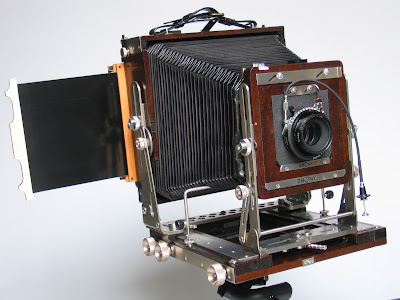 Custom Wholeplate #1, designed by Ebony / Hiromi Sakanashi
Which brings us, finally, to the Ebony. Early in 2006, with the prospect that the excellent Ilford FP4 Plus and HP5 Plus emulsions would soon be available factory-cut to whole plate size, Sal Santamaura began to investigate the possibility of having a new camera built in the format. An experienced amateur photographer and fan of contact printing, Sal had previously worked with both 5x7 and 8x10 and was keenly aware of their respective limitations relative to his photographic ambitions. Now, some fine whole plate examples that he had encountered in the work of Ansel Adams became the inspiration for a bit of creative thinking. A brand new whole plate camera offered the potential of achieving an ideal balance, combining the precision and versatility of a modern view camera design, easier portability on Sal’s favorite Rocky Mountain trails compared to an 8x10, and a contact print size more pleasing and practical than either 5x7 or 8x10.

The Ebony Co. of Japan was the logical target for a query. Ebony is well known in the large format community for offering the widest range of wooden field camera designs and formats, and has probably the most extensive experience among current vendors in building custom models to meet special needs; and Sal had been quite pleased with the Ebony SV57 model he had used. Happily, Sal found that Ebony chief designer Hiromi Sakanashi had fond memories of the yatsugiri format and was pleased to take on this assignment.

The matter of the holders 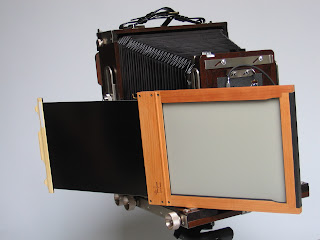 As with the camera, Sal was determined to have new film holders; for these, he turned to Lotus View Camera, another small company that, in addition to building wooden view cameras, can also build wooden film holders to custom order. Unfortunately, he couldn’t just tell them, “make me some whole plate holders!” For all of the sheet film formats that remain in general use, including the familiar 4x5, 5x7 and 8x10, ANSI standards exist that specify precise dimensions for the corresponding film holders. As a result, it’s possible to buy holders from one vendor and a camera from another and expect them to fit and work properly together, more or less. However, there has never been a standard for film holders in the whole plate format, and antique cameras utilize a variety of holder designs that are not fully interchangeable.

For compatibility between film holder and camera, the three critical dimensions of a holder are its width, which determines whether it will fit in the camera back at all; the position of the locking rib on the holder, which determines whether the holder will lock in place with proper parallelism and a complete light seal; and the “T-distance,” or depth from the bearing surface to the septum on which the sheet of film rests. If the T-distance does not match the position of the ground glass focusing screen in the camera back, with an appropriate offset for the thickness of the film, it will be impossible to focus the camera with a high degree of precision (though for many typical view camera uses involving photography at small apertures, some discrepancy can be tolerated). Finally, beyond compatibility with the camera, one must be sure that the inner dimensions of the holder are large enough to accommodate the expected film size, but not so large that the film will not be held securely.

Lotus suggested thinking about the new whole plate holders as scaled-down versions of their wooden 8x10 holders, which resulted in a T-distance borrowed from the ANSI specification for 8x10 along with external dimensions scaled down proportionately to the format. For the internal film channel dimensions, Sal obtained information on nominal film dimensions and cutting tolerances from Ilford and Kodak. The result was a film holder specification that made the manufacture of new wooden holders relatively straightforward, while being similar enough to Eastman-type holders—the most commonly seen antique holders in the United States—that those holders could be interchanged as well for most purposes. And with the holder specification settled, Ebony was able to complete design and construction of the camera back, with compatible dimensions and proper alignment of the ground glass.

Because both Lotus and Ebony needed to fit the custom work into their regular production schedules, construction of the new holders required several months, and completion of the camera several months more. In the end, the total time required from project conception to having the completed Ebony SV Wholeplate in hand was the better part of a year.

And the second Ebony SV Wholeplate? While Sal was thinking through his vision of an ideal camera, another avid large format photographer, Clay Harmon, had already begun tinkering with the format. Clay’s special interest is in contact prints made via the platinum/palladium and gum-over-platinum processes. In pursuit of the best tools for his own work, Clay had already gained experience with both antique and modern cameras in other non-standard formats. A chance purchase of a set of whole plate holders led him to have an adapter back made by Richard Ritter, which allowed him to use these holders with his late-model Phillips 8x10 camera. An antique Eastman whole plate camera soon followed.

Clay worked with these two cameras for a while, and gradually came to the realization that whole plate was becoming his “default” format. Finally, last summer, an encounter with a friend’s custom-built Ebony 20x24 inch camera inspired Clay to inquire about the possibility of an Ebony whole plate camera. With work on Sal’s camera well under way, the timing was perfect for Clay to order a second camera built to similar specifications.

The internet is key
Remarkably, at a time when digital is dominant and some perceive film as being in terminal decline, the barriers to trying sheet film formats other than the common 4x5, 5x7 and 8x10 are lower than they’ve been in decades.

The Internet is key. Between eBay, online dealer listings, specialist discussion boards and the personal websites and blogs of photographers with specialized interests, it’s much easier to learn about the existence of these things, to compare notes with others who share one’s fancies and to track down the components, restoration services, film, etc., that are needed. At the same time, the Internet makes small-scale specialty commerce more viable by making it much easier for manufacturers like Ebony and Lotus and independent craftsmen like Richard Ritter to find interested buyers and to recognize and aggregate demand that would otherwise be invisible.

I’m happy to be able to close this post with yet another example. As a result of discussions on the Large Format Photography Forum and the Analog Photography Users Group that were spurred in part by the appearance of the Ebony Wholeplate here on T.O.P., Paul Droluk of Fotoman Camera has announced that a run of whole plate holders will be produced in a modern metal and plastic design, comparable in style and proportionate in pricing to standard 8x10 holders from Fidelity and Toyo. Availability is expected for later this year. Specifications for these holders are being developed based on measurements of the Ebony as well as a range of antique cameras, with the goal of making them usable on the majority of cameras that might be encountered in the market today. To my knowledge, these are the first whole plate holders to be manufactured in this modern style, and their ready availability at a mass-production price will further reduce the barriers to experimentation with this wonderful format.