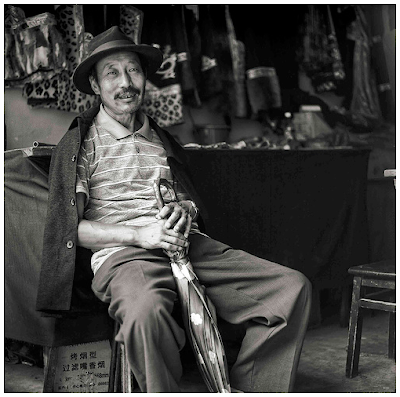 "A Glimpse of the World" (Howard French): The local tailor.
Danba, Sichuan Province. October 2006. Rolleiflex 2.8, Ilford Delta.
For me personally, one of the important outcomes of the "Jonathan Greenwald: Conscientious Street Photographer" thread was a modest comment that included a flickr link from someone calling him- (or her-) self "A Glimpse of the World" (hereinafter referred to as Glimpse, with male pronouns, and apologies from me if the latter is incorrect). Glimpse apparently prefers not to be known, but has amassed an impressive amount of unusually fine work on flickr—I've returned to his page three times over the past few days, each time discovering more to look at. He practices a sort of street/travel/environmental photography in various cities around the world, and has a fine eye for honest documentary and found portraiture.

You'll notice that he switches formats (35mm and medium format), cameras, and films, and mixes black-and-white and color. I normally find that photographers who do this create an obstacle for themselves that's difficult to overcome, with the technical inconsistency fracturing the integrity of the message. (It's difficult enough to create, and conform to, a consistent style in photographs.) While I still have some reservations about Glimpse's work in this respect—at least as it's presented on flickr—I think his vision survives the self-imposed handicap pretty well. See what you think.

Mea culpa: A number of commenters have (correctly) identified Glimpse as Howard French. I don't know why my reportorial/researcher abilities abandon me whenever I get on flickr, but it's happened before. For some reason I seem to have a congenital lack of affinity for the flickr interface—the pictures are too small, navigation confuses me, and I never seem to know exactly what the heck I'm doing. I swear I looked for Glimpse's identity on flickr for 15 minutes before concluding that it just wasn't there, hence the title of this entry. What can I say? Write it off to my incompetence, I guess.
5:15 AM
Unknown