A Brief History of Electronic Photography

The Digital Wave has been a long time coming. Today it seems like a tsunami, but for decades it was January and that wave was made of molasses. Still, it was foreseeable and nobody should have been surprised that it would arrive eventually. Here's an incomplete and semi-personal history of what we used to call "electronic photography."

More than three decades ago I saw prints that had been made in the 1960s by a Xerox printer for U.S. government aerial reconnaissance. The machine probably cost a million dollars and required a large crew to keep running. But the prints looked exactly like well-made darkroom contact prints: semi-glossy paper carrying a full and rich continuous-tone image. A taste of the future.

In 1971 I was wrestling with collecting astronomical data. It occurred to me that one could make a new type of photo detector. Put a matrix of tiny silicon photocells on an integrated circuit. Instead of bleeding off the light-generated power from each cell, store the charge in the chip. After you collected sufficient light, change voltages to read out the charge. I thought I was brilliant. Bell Labs was at least two years ahead of me. Moral: do your patent searches before you invent.

The same year I designed a modern digital camera. In every important detail it's what we have today. It took 30 years to get the performance/price ratios I sought but that's not important. What is important is that I was likely not the first: the design was a straightforward and inevitable extrapolation from 1971 technology.

In 1972 I went to work for a company, Electroprint, that was developing new computer printers and photocopy and photographic printing processes. They had me making electronic B&W prints in the darkroom from the beginning.

In 1973 Agfa approached us about developing a photofinishing process. By the end of 1973 I was making color prints from B&W separations in the darkroom.

In 1974 I figured out how to make electronic color prints directly from color negatives in the darkroom. So far as I know, this is the first print of its kind. 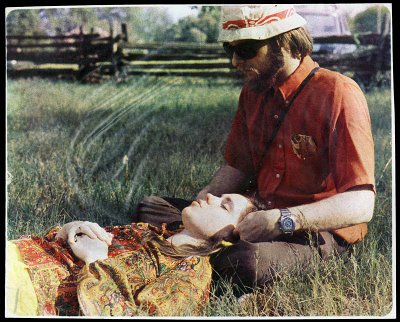 It's wrinkled and it's beat up, but it's mine. So far as I know, this is the first-ever color negative print made electronically. It dates from 1974. Anybody know of an older one?

That was more than 30 years ago. I've waited patiently waiting for the world to catch up. Has it finally done so? Yes, pretty much.

And my only question is, "Gee, what kept you?!"

Posted by CTEIN
4:36 AM
Unknown