Photographers and Their Toys: Meet the Toy Polloy

These days, everyone is shooting with a digital camera. The new Nikon or Canon, the highest megapixels, the memory cards, Photoshop this or that—this is the talk of the trade among photographers. Camera companies are ceasing production of many of their film camera bodies, and film companies have noticed a decline in sales as well. But all is not lost to the surge of the digital era. Film is not yet dead; there are still legions of purists out there who recognize the nuance, beauty, and depth that cannot be replicated with any computer program.

Among these film users are a growing group of camera enthusiasts who use toy cameras. Armed with their Holgas and Dianas and various clones, homemade pinhole cameras, or even a vintage flea market Brownie Hawkeye, these photographers have established a niche in photography. They make images that are often blurry or obscured, rich with texture and unexpected variation. Toy camera photography is on the rise.

To showcase the beauty that can be created with these odd little cameras, Kentucky-based photographer Tread (GoTreadGo) has brought together 30 Toy Camera users for an international event called Toy Polloy. On Friday, November 17, 42 images from thirty artists will be displayed at the Icehouse in Lexington.

Recently I was fortunate enough to interview Tread and a few of the talented photographers who will be featured in Toy Polloy. Here's some of what they had to say about their cameras and their art.

Tread: Toy Polloy is the name for an international photography show featuring work created with toy cameras. The term is taken as a play on the phrase "hoi polloi," which is derived from the Greek meaning "the many." The term is used in a more derogatory fashion to mean "the common people." Most artists wish to be anything other than common, so Toy Polloy is that push for the toy camera photo artist to be thought of as uncommon in the current world of digital media. 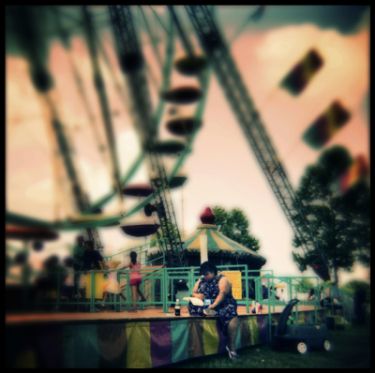 Tread, Sitting This One Out
CS: How did Toy Polloy come about? Where did you get the idea?

Tread: I've been lucky enough to have my toy-camera-produced shots end up in some good gallery shows: Krappy Kamera at the Soho Photo Gallery, for instance, and Toy Joy, in Houston, as part of FotoFest. The success and professionalism of these events inspired me to try to curate a show similar in scope, but a bit different, here in my neck of the woods, Lexington, Kentucky.

CS: What is your definition of a toy camera?

Tread: The $64,000,000 question, I guess, but I'd say any camera meant to be used by a kid. Cheap, plastic, not very durable. But the primary and consistent defining characteristic is a plastic lens.

Warren Harold (That Was My Foot): Ultimately, any camera that throws control out the window is a toy camera to me. You can filter that down to any camera that has a plastic lens and/or minimal controls. Beyond the Holga and Diana, I consider a lot of the mass-market cameras of the past to be toys as well. The Brownies, Imperials, Anscos, a lot of those. 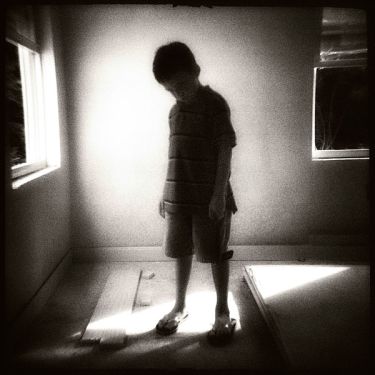 Warren Harold, Spaces In Between
CS: What is the appeal of toy cameras for you?

Tread: The appeal to me is fairly simple and probably the same as most who regularly use these cameras as a tool for artistic expression. Toy cameras capture scenes in what I term "unrealism." Most moments are not reproduced as they were; there is a quality caused by the potential of blur, vignetting and less-than-optimal framing that can be classified as dreamlike. I tend to think that the toy is merely trying to capture an image akin to how my memory pieces together a single 1/100th-of-a-second scene from my past. You can think about what you are shooting and not about the camera or controls. There is freedom there that is undeniable. 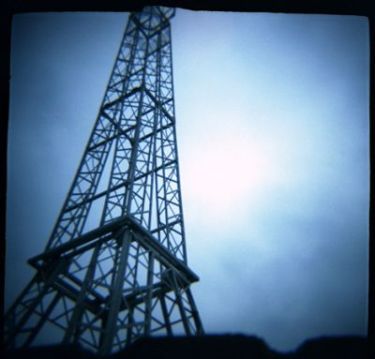 Angie Harris, Eiffel Tower—Columbus
Chris McLemore (Fotogeneric): The ease of use is a nice appeal. I can toss the camera in my bag and not worry about damaging it. It's also nice because the camera lets me worry more about the subject than the technique. With my digital camera I am much more likely to just start shooting. I'm much more deliberate with the toy camera. 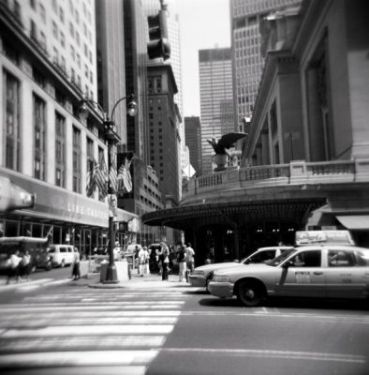 Chris McLemore, Corner of the Apple
CS: What are some of the reactions you receive when shooting with a toy cam in public settings?

Bill Vaccaro (Out Of Contxt): The latest one was when I was in the checkout line at the supermarket. One of the clerks asked if my modified blue Holga was a digital camera. Also, I've found that people are a bit looser in allowing me to take their picture when they see that I'm shooting with a crappy camera.

CS: Do you feel that there is a niche for toy camera users professionally?

Bill: Absolutely! Just look at the work of photographs like Mark Sink, Nancy Rexroth, and Susan Burnstine, just to name a few. 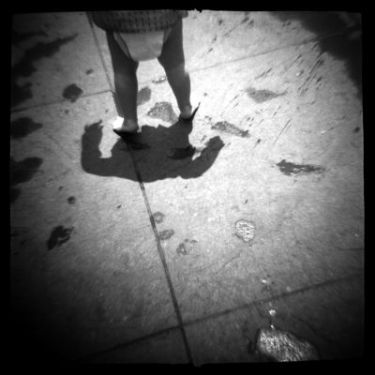 Bill Vaccaro, Baby Legs
Chris: Certainly. Toy cameras can produce really unique images that can have the same impact as shots taken with any other kind of camera. Powerful images will make people forget the "toy" aspect really quickly.

CS: What is it that you hope to achieve through your photography?

Warren: Joy. Corny, I know, but that's the big payoff for me. And I hope that comes through in my images. I get behind the camera to capture those all too brief moments in time that make me stop. Smile or weep, it doesn't matter. Just to feel. I truly get excited looking at a fresh roll of film for the first time. If it excites someone else, that's all gravy. I'm flattered.

Tread: If world peace and/or domination is out of the question then I'd say my main mission is to build a body of work that when looked at as a whole says just a little about how I see my world. In my world there is an obvious dichotomy. Complexity masked in simplicity. Intimacy vs. desolation; cute kids vs. discarded items or places; love vs. distance and disconnect. It has to be about the picture at the end of the day and the camera is just the tool to get to the final outcome. Photographically my main influence is Ralph Eugene Meatyard, a part-time photographer from the town where I reside who really set "art photography" on the road to where it is today. He shot his surroundings and family and friends in ways that were not snapshot-ish yet still simplistic. The mystery behind the image was always there. I try for that in my work, that mystery of what is behind the moment.

CS: There seems to be resurgence in popularity for toy cameras. How do you feel about that?

Warren: The more the merrier! I encourage everyone to get one. I think this little boom has dumped a ton of creativity into the mix. There are a lot of people out there with these things doing some amazing work, creating fantastic images. That's nothing but a load of good.

Tamara Keever (Moments of Mine): I think it's great. I think everyone should try it. It's just a lot of fun. The "click" is addictive. 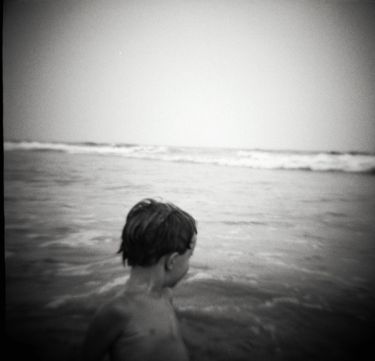 Tamara Keever (untitled)
CS: Where do you find your cameras?

CS: What is your favorite camera to use?

Angie: No doubt about it, my Holga…or, as I refer to her, "Miss Holga."

CS: There are a lot of little techniques and tricks that can be done in Photoshop to replicate the "look" of a toy camera image. How do you feel about that? Do you feel like it's cheating?

Tamara: Well, I think that it's fine, actually. But, I don't really understand it. If someone wants a toy camera look, and they are a photographer, they should just go out and get a toy camera. It's not like it's evil to shoot film or anything. But, after all, it's the final image that people really connect with, not how it's created. If an image is created in Photoshop, and created such that it connects with someone, then that's all that matters. There are really many ways to get a toy camera look, without using a toy camera at all.

• • •
If you find yourself in the Kentucky area this weekend, make a point of stopping by the Icehouse at 412 Cross Street in Lexington to view this spectacular display of art, talent, and passion. If a trip to the Bluegrass state is out of your reach, then choice images from Toy Polloy can be seen on the web, where FlakPhoto and Light Leaks magazine have teamed up to feature select artists from Toy Polloy in a week-long display of their work.


Featured Comment by gravitas et nugalis: I have been a krappy kamera proponent from way back. As far back as the early 70s I created a photograph for an album (vinyl) using a Pentax 110 SLR—not exactly a krappy kamera, but the results of enlarging an ASA 400 110 negative to album size could be described as "krappy."

I do however part ways with the current mainstream kk crowd in as much as they seem to have a distain for digital kks. This puzzles me inasmuch as there are many krappy digital kameras out there with plastic lens, fixed focus, low resolution, very iffy framing/viewfinders, and absolutely no control over exposure (although they do operate on a very hit-and-miss "auto" exposure). They do lack the light-leak feature.

An added feature of digital kks that most "traditional" kks lack is diminutive size and weight that makes steady hand-held photography a real challenge.

Some of my digital krappy kamera stuff 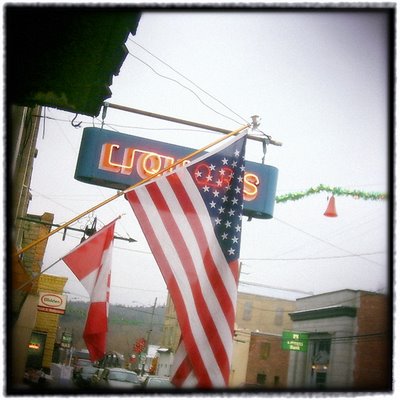 Mark Hobson, The Night Before Christmas in Au Sable Forks
10:06 AM
Unknown