Home » »Unlabelled » We Need a "Histogram Mode" for Camera Exposure

We Need a "Histogram Mode" for Camera Exposure

I was reading a nice article called "My Year With Digital Cameras" by Dave Beckerman, recommended to me by a reader called Wituniasty (thanks, W.), when I came across this paragraph:

And so—I ran into another digital issue that irked me. I was using the Canon 20D and I always had trouble with burnt-out highlights. I was always looking at the histogram to see if I had lost any data with a spike at the right side. So eventually you find yourself shooting 1/3 or 2/3rds of a stop under, just to be on the safe side—though what you really want is to approach the edge of the histogram cliff without falling over.

And the thought hit me like a eureka moment: why not have an exposure mode on cameras that simply puts all the highlight information just to the left of the right-hand side on the histogram?

I can think of a lot of technical reasons why this might be difficult, as I'm sure you can. Mainly that the histogram is an analysis function (post-exposure) and and exposure is a metering function (pre-exposure), and, second, that the mirror gets in the way of integrating the two. Fine, but camera engineers are remarkably clever folks, and they could get there if they tried.

It's what we need, anyway.

For those of you who have no idea what I'm talking about (histogram, schmistogram), try this. When you open up one of your pictures in ACR, here's what it might look like: 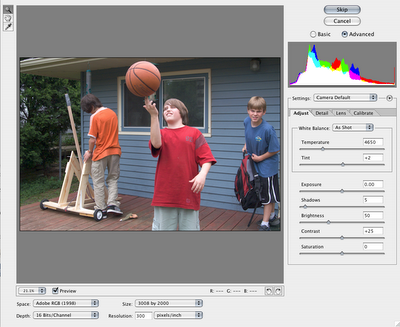 Now I don't know about you, but I think the first thing pretty much everybody does is to take the "Exposure" slider and slam it all the way over to the left: 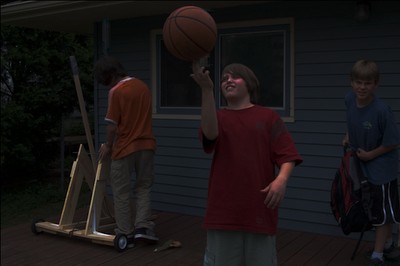 ...Which gives you a quick, positive, visual read (wherever a bright area remains) on where in the picture you allowed your highlights to blow out when you took the pictures. Meaning, for me, that if any of these areas are prominent or important (the cheeks and left forearm of the kid in front in this shot), these are going to be the touchy areas you're going to be struggling with during all the rest of the processing procedure, because those are the areas where you don't have enough information in the file.

The ideal, of course, is not to have any blown highlights at all—in Dave's words, "what you really want is to approach the edge of the histogram cliff without falling over."

It would be cool if the camera could be set to do that natively.

Comment by Carl Weese: Huh? "Take the 'Exposure' slider and slam it all the way over to the left"? Why would you do that? If you click on the Exposure slider while holding down the Option key, Photoshop shows you all the burned out highlights in a field of black. Slide the exposure to the left until the clipped areas merge into the black field and you've compensated. In the same way if the file is underexposed you can Option click the Exposure slider and move it to the right until clipping occurs, then back off just enough to get rid of the clipping. This is how ACR was designed to be used....

Mike replies: Well, you learn something new every day. Although I did figure out why I've never used this particular trick...when I hit the option key on my (non-Apple, non-standard) keyboard, it brings up a nice, bright display of which apps I have open at the moment. You know what they say: Oh well. When I tried it with the other option key, however, it worked. Thanks Carl.

Featured Comment by dcs: I don't know about you, but I'd rather have a sensor with enough dynamic range that I wouldn't have to worry about clipping the highlights and exposing to the right.

Having an exposure mode that keeps the histogram just to the left of clipping seems like a hack to get around the limitations in current sensor design. I imagine we'll see better sensors before any kind of exposure mode like that.