Some recent email correspondence raised an interesting (and not uncommon) misconception about what color management and profiling does for digital printmakers:

"If [good color] truly has a 'psychological component' to it, then what looks good to one psycho may not look so good to the next. True? Then, custom tweaking, adjustment, and trial and error at the hands of an experienced human being beats the mathematical perfection [of printer profiling] any day."

Which led me to the following informative (I think) analogy.

Ever played a musical instrument? Consider, for the sake of discussion, anything with strings in it—guitar, piano, violin. Every instrument (at least, every make) has its own flavor and feel. If this were not the case, a lot of currently valuable instruments would cost a lot less! If you want to be a consummate master performer, you learn how to make your performance work with the unique characteristics of the instrument.

You with me on this? Well, profiling is nothing more profound than tuning the strings on your instrument. It doesn't eliminate an instrument's unique flavor. It doesn't provide you any standard way to play a piece. But, after tuning, each note you play be as much on pitch as the instrument can make it. 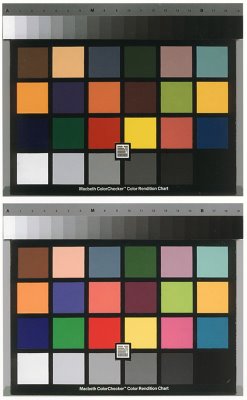 On top you see what a printer does without profiling. The overall color balance is right, but the individual tones and colors are not. How much truer the bottom, profile-created print is. It has far fewer 'sour notes.'

It's still your responsibility to turn the score into a moving performance; it's always gonna be up to you to decide how the score should be interpreted and performed. Still, you'd rarely intentionally play on an out-of-tune instrument, right? That's what you're doing when you print on a poorly-profiled printer.

Profiling doesn't replace human judgement with an algorithm, it only reduces the instrument's distortion of your judgement. Nothing more nor less. The nuances of the print are now more of your own making than imposed by the soulless hardware. That's what profiling your printer does for you.

By the way, profiling is nowhere so important for monitors, so long as you're working by yourself (it's a must when working with others). A good profile makes the monitor more closely match the output, so you waste less time and materials allowing for 'windage,' but it doesn't actually change the print in any way. It makes life easier, but you can make your bestest prints without it.

You can't without a good printer profile. An' dat's da troof!

Posted by CTEIN
9:22 AM
Unknown