Bill Ford and the Siren Song of the Cash Cow 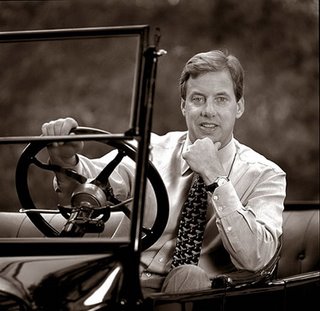 I first experienced image stabilization (IS) in a pair of binoculars, and I was suitably impressed. I was out on my late Uncle Cam's "stinkpot" (powerboat), watching a sailboat race, and he handed me his then-new Canon IS binoculars. As if by magic, the typical visual jitter of high-power binoculars was eliminated—the magnified image of my cousin Chris's eldest boy, also named Cam and a highly skilled champion sailor, was as steady as if I were seeing him with normal eyesight.

(Note that most companies have their own name for the feature—Nikon's is "VR" for vibration reduction. I'll refer to it here as IS, generically.)

The feature soon made its way into SLRs, also compliments of Canon. I believe the first IS lens was a 75–300mm consumer telephoto zoom, although I'm just going from memory. A couple of years later I remember reading a fascinating insider account of how MITI and the Japanese government brokered a deal essentially forcing Canon to share some of its technology with Nikon. I don't know if that included the IS technology specifically, but I would have loved to be a fly on the wall at that meeting.

Underneath most camera technology of Japanese origin is a complicated web of patents and trade secrets and an equally (if not more) complicated web of nationalistic cultural customs regarding the sharing and trading of those patents and technologies. I'm not privvy to the details of who owns what with regard to image stabilization, but, clearly, the feature is making its way into the mainstream. Several manufacturers have IS-type lenses and there are now a number of digicams sporting some version of the feature.

Some people don't need it much and therefore don't care for it. It's particularly important, however, to my way of working, since I like "available dark" yet don't like tripods; I wrote more about this in my review of the Konica-Minolta 7D in Black & White Photography magazine (U.K.) a few issues back.

Like so many technical issues in digital photography (in my view, anyway), IS is both partly resolved and partly still provisional and subject to change. That it's here to stay is undisputed. Whether in-camera or in-lens variants will continue to co-exist or whether one strategy will eventually win out over the other hasn't been decided yet. Proponents (read "owners and users") of in-lens IS point out that it works better in a long lens than a long lens on an in-the-body IS camera does. The opposite point is just as valid: by making an IS lens out of any lens, the in-the-body scheme is the only way to get IS with many shorter lenses, faster lenses, and most primes.

As I wonder whether "The Big Two," Nikon and Canon, will ever move to in-the-body IS, I'm reminded of a situation from the auto industry. Recently, as you've probably heard, Ford Chairman Bill Ford brought in more new management from outside to help run the company, and, with sales of big SUVs and pickups in the tank due to the high gas price scares of last summer, and losses mounting dramatically, Ford made Draconian cuts to its workforce and closed several plants, and Toyota overtook it as the #2 automaker in the U.S. The funny thing about that is that I distinctly remember an incident in about 1996 or 1997 it must have been, when this selfsame Bill Ford made some derogatory comments about the wastefulness and environmental unfriendliness of his company's largest SUVs and light trucks, suggesting that Ford shouldn't be making them. It was reported as a faux-pas, as if the wet-behind-the-ears young family scion didn't know what he was talking about, and he was reportedly quickly silenced by his money-men, who reminded him not so gently that big SUVs were the company's cash cow.

So how does that look now? If Ford the company had followed the impulse and direction of Ford the chairman back then, it seems to me that Ford would be in much less hot water now—and Bill Ford would be looking like a visionary.

Business is always a minefield, but one recurring motif is that when companies get too wedded to their cash cows, sometimes it misleads them into adopting the wrong strategies. Pentax, for instance, was the leading SLR maker of the 1960s, but it stuck with its trusty M42 screwmount for too long, and the makers of coupled bayonet-mount cameras overtook it. The same thing happened to Olympus when it decided in the mid 1980s not to make the OM system autofocus.

Anyway, my "educated guess" is that Canon and Nikon are happy for the time being to continue to implement IS in their lenses, because they are doubtless making more money off the feature that way. But they must also be nervous, too. Sony has not yet earned the right to make the "Big Two" the "Big Three," but it's got the potential—and it inherited from Konica-Minolta all the patents and implementation experience of in-the-body IS for DSLRs. I imagine there are people inside Nikon and Canon who are advocating that those companies develop in-the-body IS DSLRs, and there are probably other people in both companies telling them to stop rocking the boat because the in-lens versions are turning more profit.

Time will tell who ends up looking like the visionaries.

Photo credit: Bill of the ilk behind the wheel of a not-so-new Ford, from Le Blog Auto.
Posted by: MIKE JOHNSTON
6:12 AM
Unknown