In 1995, when I was living in Chicago, I noticed something strange...despite the fact that the Jordan-led, Jackson-coached Bulls were well launched on an historic roll, every time I watched them play, they lost. Sports people would see meaning in such a thing, but sports people are superstitious, and superstitions aren't real—are they?

I live in Wisconsin now. My strange effect as a hex on Chicago sports teams had to be a thing of the past, right? After all, the Bears were playing the lowly Miami Dolphins today. Even the Packers beat the Dolphins last week, and the Packers, this year, would have their hands full against the University of Michigan. 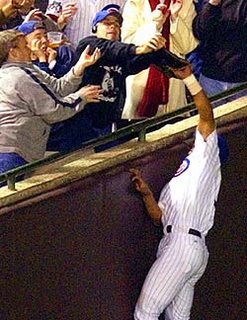 The Infamous Fan Interference Catch: Yup, I saw the game,
even though I almost never watched Cubs games.
The result made me remember the last time I saw Jordan's 1995-96 Bulls. My Chicago friends, being superstitious, were constantly after me not to watch Bulls games. These curses take strange forms, they insisted. But the Bulls were setting records, and I really wanted to watch a game. Just to be safe, I decided to watch them play at home, against a hapless team that was in the cellar of the NBA at the time.

Ah, yes, I remember it well. The date was April 8th, 1996, and the opponents were the inept Charlotte Hornets, who couldn't have beaten the 2005 Sacramento Monarchs. And the Bulls hadn't lost at home in forever. Heck, it was as close to a mortal lock as professional sports ever gets.... 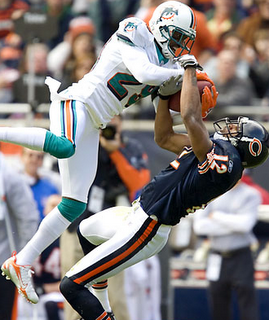 I ended up seeing five games in the 1995-96 Bulls season, in which the Bulls went 72-10 for a record that still stands. In the five games I watched, they were 0-5. Including, of course, the game in which the lowly Hornets snapped the Bulls' 44-game home win streak.

This should go without saying: The 1-6 Dolphins shellacked the 7-0 Bears today. It was never close. It was almost like the Dolphins had some strange, mysterious force on their side....

Bears fans, I swear: no more Bears games for me this year.